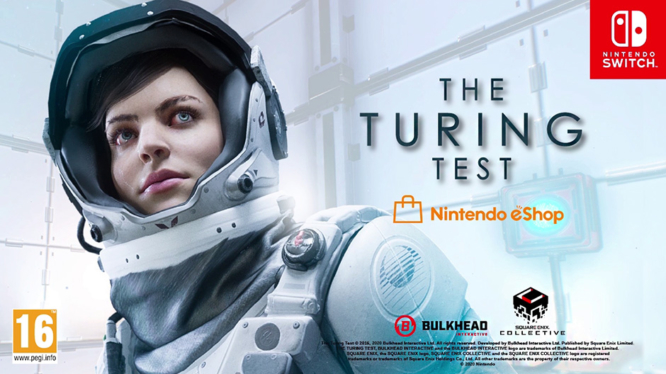 Bulkhead Interactive’s The Turing Test puts the player in the shoes of Ava Turing, as she awakens on a research station for one of Jupiter’s moons, Europa. Throughout your playthrough, Ava uses a tool that collects and distributes some form of energy orbs in co-ordination with electronic platforms, lasers, and even remote-operated robots in the environment to solve puzzles. Throughout her journey through the base, Ava is accompanied by T.O.M., an artificial intelligence who oversees the station.

Awaken in an unfamiliar world 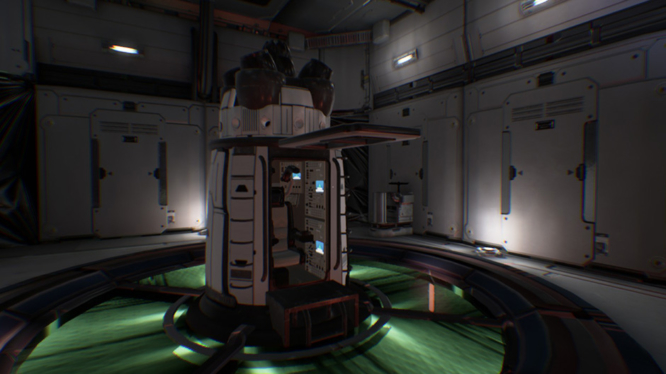 When Ava (that’s you) first wakes up, there’s little context brought to the situation. A classic motif that probably could have been done a bit better, but did offer some immediate intrigue. Wandering around, it became obvious I was stationed in space. Knowing there could be secrets eluding to what was happening around me, I continued onward, carefully scouring the station for any clues I could find.

With a single corridor to head down, I continued, passing by the quarters of several other people in the station. Each of these rooms had it’s own name, as well as a year it’s inhabitant was scheduled to wake up. Curious, I took note of the display panels above each of their chambers, trying to piece together the current year. Well, all save for one worrisome room, where monitor was registering an error. Seeing this error screen made me excited for what was to come, and what sort of evil or dystopian story was possibly about to unfold.

Passing the rooms, I soon came across a screen with a 404 error on it, accompanied by volumes of digit numbers and letters. My intrigue having been piqued, I studied the screen closely and soon noticed the letters only went as high F. At this point, I proceeded to translate these hexadecimal letters into English, and my intrigue was fulfilled. I had learned that the message being displayed ad nauseum was the words “I am a boy.”

Upon reflection, this message continues to sate my curiosity. I speculate it’s a reference to the tale of Pinocchio, a crafted and created character who believes himself to be “real”, to be “human”. This message reflects on T.O.M., as he also finds it difficult to distinguish a human from a machine.

A girl and her robot 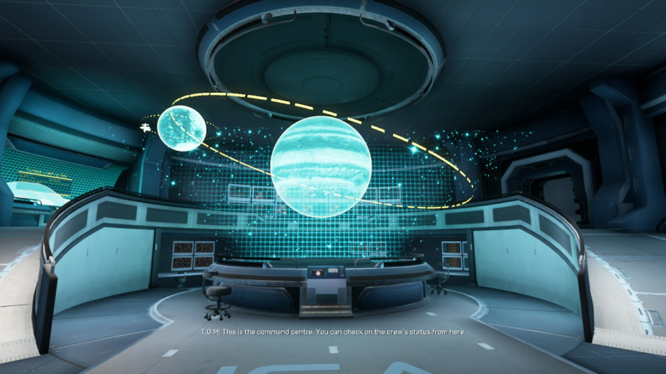 The first puzzle I was tasked with in The Turing Test required putting a box through a window, an exceedingly simple conclusion to have reached, but one T.O.M. is taken aback by. Later in my adventure, he’s found referencing this time saying “I would not have thought to put a box through a window”. While a light humorous jest, this is also reflective of T.O.M.’s behaviour as an AI.

During a later puzzle, Ava asks him what he would do to solve is, to which T.O.M. replies that he’d cut off his arm so his finger wouldn’t be removed from a button. Ava replies saying she doesn’t need his help. This dynamic between Ava and T.O.M. proves to be among the most fascinating parts of The Turing Test.

As each test comes to its conclusion, T.O.M. simply can’t understand what comes off as normal, while what seems normal to him is outright odd to me. Providing a steady reservoir of interest is what puts T.O.M. at the core of the story, as I learned to appreciate why he found humans so bewildering, and why he may not be quite as human as his human-like persona might have you believe.

Ava’s on a mission from T.O.M. to locate the missing crew on the research station embedded on Europa. The puzzles Ava must complete were designed by the team as a Turing test to prevent T.O.M. from getting through the station to find them.

The tale of The Turing Test is rather nuanced. It delves into the ethics of autonomy, as well as the risk it potentially poses. Your fellow researchers had discovered that T.O.M. was taking steps to maintain their compliance, and upon this discovery, chose to regain their ability to act freely. T.O.M., after the team had learned something that potentially threatens all life on earth, took action to protect the earth, but in-so-doing must also bring harm to the researchers.

Across my six and a half-hour play-through, I found myself constantly intrigued. The rooms that would infrequently appear between these Turing tests were always filled with lore to read, filling out the world and making the research centre feel lived in. Pictures of family and pets back on earth were left in each of the crew-members’ dorms, with one researcher even having a full journal of how they felt about T.O.M. 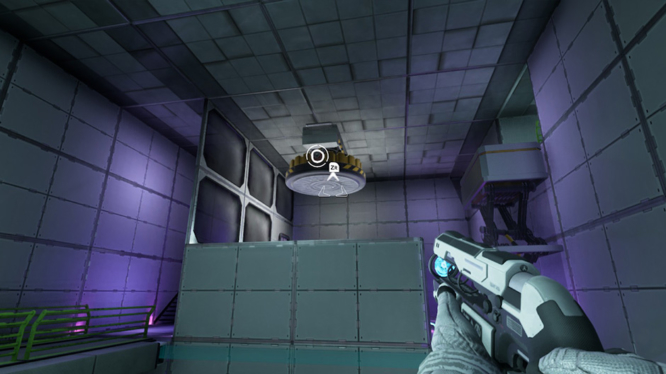 The puzzling mechanics of The Turing Test leave something to be desired. While comparisons to Portal are easy to come by, The Turing Test is not at all a physics-based puzzler. Each test has a single solution, and that solution is absolute. I found that most puzzles were easily solved in my first attempt, a result I found somewhat disappointing.

Constantly jumping from level to level, one would expect at some point a difficulty curve to take place, alas The Turing Test makes few attempts to do so. The Turing Test is best enjoyed as a laid back puzzler where you jump through puzzle after puzzle completing them with haste. Unfortunately, the game offers little in terms of replayability as well, leaving its first play-through almost certainly your only one.

The interface is rather smooth and intuitive to use. Pointing at interactable objects will have them outlined in white, and if you can deposit/withdraw an energy orb, it’ll present a ZR or ZL icon corresponding to the action. This form of indication does make for an intuitive selection of in-game objects, making it clear exactly what you’re pointing at, and what interacting with that object will do. I was left to figure out most of my controls on my own, but they were designed in such a way that it’s quite easy to discover.

The music of the game brought a sense of ambience to my play-through. While there aren’t many tracks, what’s there is all very calming and gives a real sense of tranquillity, at the risk of being reminiscent of elevator music, mixing in piano with some very light techno undertones. It all moves very slow and is relaxing while playing through the game’s many stages. 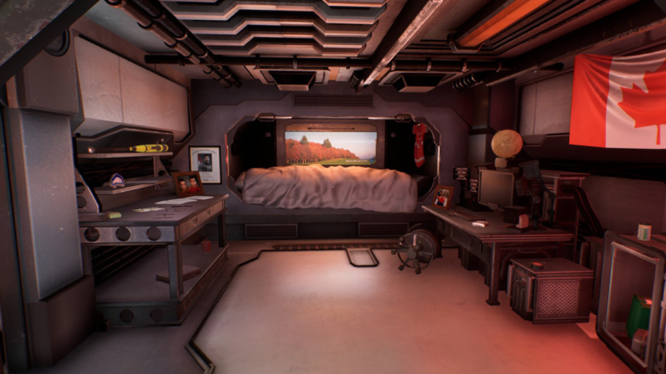 The Turing Test takes advantage of the Nintendo Switch’s hardware. The frame-rate is generally smooth, and never noticeably dips, though some objects were rendered in lower resolutions. Namely, the energy orbs Ava uses in every puzzle, when placed in one of their boxes, no matter how near or distant the player is from them, always end up looking rather unpleasant with pronounced blockiness.

Aside from that, the resolution and models look pretty good. There are lots of nice lens flares throughout the game, albeit at times there may be a few too many. I did also find some textures down-scaled a tad too much, with some of the post-it notes and letters laying around left entirely illegible. This was quite disappointing, as I was interested in the game’s lore and story, which these post-its are often a conduit. Some interactable items (such as levels and conveyor belts) are also quite difficult to distinguish from the rest of the test chambers’ decor.

Unfortunately, I also encountered a few minor bugs during my play-through. At one point, after jumping off of a ledge and landing, the gun-like tool my hands were once holding suddenly disappeared. Another time, I was in a simulation and accidentally backed out. Unable to re-enter it, I decided to restart the current sector. When it loaded, I was instead brought to the next sector. Despite this, the dialogue from the previous sector had played again.

There’s also the issue of the dialogue running out of sync with their subtitles. Subtitles would appear and disappear before their appropriate line in the voice-over had even begun, which isn’t exactly ideal if you need to check for clarification.

Ultimately, the length of The Turing Test leaves me wanting more and I wish the story had continued after the final chapter. The narrative feels somewhat incomplete, though this is by design. Despite this, what’s there is quite enjoyable.

Overall, the impression The Turing Test left with me was definately positive. I’d even go as far as to recommend it to some of my friends (who are fans of more narrative-driven games). The charisma between Ava and T.O.M. is very strong, and when enjoyed as an interactive movie, the narrative is rather compelling.

With 70 levels to complete and a play-time of around 6-8 hours, I do think The Turing Test is worth your time. That said, unless you’re looking for a relaxing puzzle game, you might find more enjoyment in clearing your backlog.

The Turing Test is an enjoyable laid-back narrative-oriented first-person puzzle game, but with very little in terms of the way of challenge, it may be best left for a rainy weekend. The Turing Test fulfils its narrative while paying homage to other stories contemplating moral ambiguity.