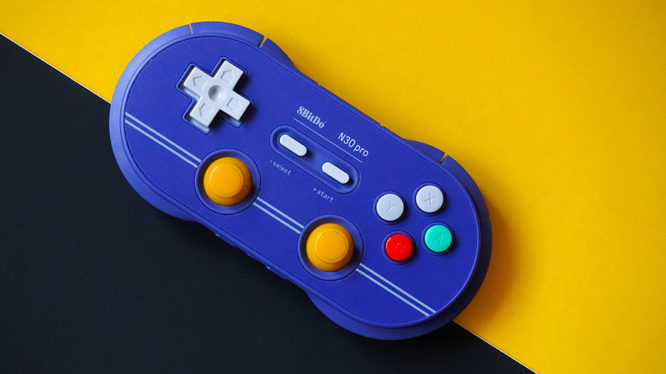 The moment I saw 8BitDo’s snappily named N30 Pro 2 C Edition, I knew I wanted to get ahold of one. I was already on the market for an alternative controller to Nintendo’s own Pro Controller and the nostalgia-inducing design of the C Edition had its hooks in me.

It’s immediately obvious that 8BitDo was heavily inspired by the GameCube when designing the C Edition variant of the N30 Pro. The indigo plastic they picked is a perfect match and is accented by striking yellow sticks, just as you would expect.

Over to the right of the controller, 8BitDo has accurately coloured the A, B, X, and Y buttons in the green, red, and grey colours from the GameCube too. It’s a nice little attention to detail that made me smile.

I must say though, I’m not a massive fan of the horizontal lines that span across the body, cutting through the sticks in the process. They seem out of place. As if they were pasted on from an original Famicom controller and not in-line with the GameCube theme the C Edition is otherwise faithful to.

If the Gamecube doesn’t hold much nostalgia for you, 8BitDo also offer the N30 Pro 2 variants that take inspiration from the N64, NES or Sega Mega Drive.

Aside from colour changes, all versions of the N30 Pro 2 are identical. The shape reminds me of the “dogbone” style controller that was bundled with the NES-101 top loader in North America. I found it to be comfortable in the hand, and for such a small controller it feels solid and of high quality. Your mileage may vary if you have larger hands that struggle to grip an NES or SNES controller.

All of the requisite buttons have been squeezed onto the N30. Due to its size, the buttons that act as Screenshot and Home have been relegated to the bottom face of the controller.

It’s the top of the controller that will pose a problem for some people though. Unlike the traditional L, R, ZL, and ZR layout that the Pro Controller uses, 8BitDo opted to align the buttons. If you’ve used a New Nintendo 3DS then you’ll be familiar with this configuration. L and R take the outer position, with ZL and ZR further into the controller.

I thought I would categorically hate it but within an hour or so it began to feel more natural. I still don’t think it’s ideal, but for games where the triggers are used sparingly such as Celeste, Moonlighter or NES classics, it works.

Also up top is the USB-C port that’s used to charge the controller. It was a pleasant surprise to see 8BitDo move from Micro USB in the original version of the N30 Pro to USB-C in this newer revision. It means that the N30 Pro 2 can be charged with the same cable as your Switch or Pro Controller and it’s one less cable to keep around.

Another design touch I really appreciate are the LED strips around the lower edges of the controller. When switched on, the N30 Pro 2 has two blue LED strips that “breathe” to show that it’s still alive. 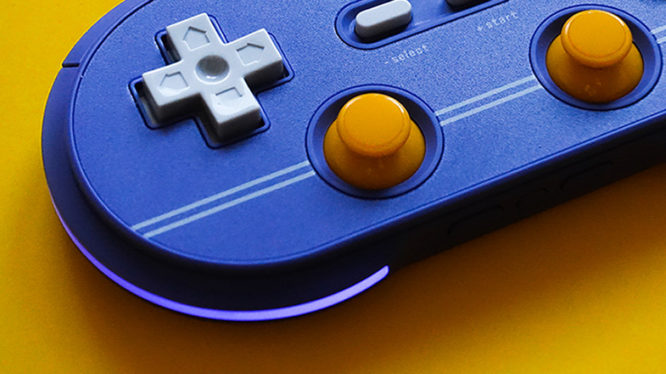 When I first saw them, I was reminded of the long forgotten Sony Mylo from the mid-2000s, whose similarly shaped light would pulse when connected to Wi-Fi. These strips perform double duty as a battery indicator too. They turn red when the battery is low and yellow when charging; turning off when fully charged.

Not just a pretty face

As I said before, I was already on the market for an alternative controller when I saw the N30 Pro 2. I love my Pro Controller and deem it to be an essential purchase for most Switch owners. Having said that, it does have one well-reported flaw – the D-pad sucks.

For most games, this isn’t an issue as the D-pad hasn’t been the primary way to move pixels on a screen since the N64. However, I find that I’m far more precise with a D-pad in 2D platformers like Celeste and Hollow Knight. 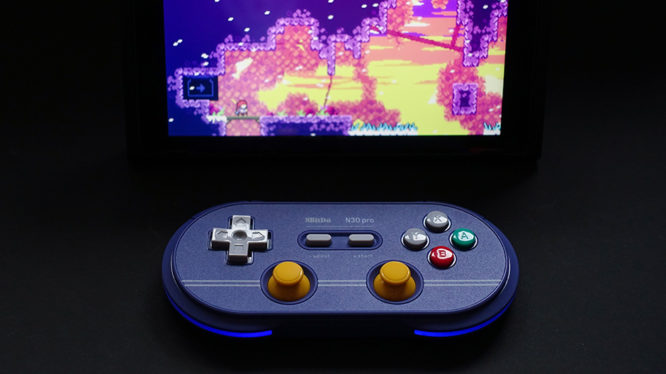 Thankfully, the N30 Pro 2 (as well as the Hori D-Pad Controller) fills the D-pad shaped hole in my life. It feels absolutely fantastic to use. Just the right amount of pivot, not mushy in the slightest and really responsive. It’s right up there with Nintendo’s own D-pads on original NES and SNES controllers in my eyes.

Don’t let the look of the control sticks deceive you either. They might look just like the GameCube’s C-Stick and do have a similarly small surface area, but they’re clickable and feel very different. If anything, they most feel like the PlayStation Vita’s when moved around. I definitely prefer the sticks on the Pro Controller but these do the job.

Pairing the controller with my Switch was relatively straight forward (once I’d read the manual). Due to the fact that 8BitDo crammed support for Android, Windows, and macOS in here alongside Nintendo Switch compatibility, there is a bit of combo pressing on first use.

Once connected, the N30 Pro 2 pretends to be a Pro Controller. Just like a Pro Controller, the N30 sends a jolt when it springs to life from sleep. I didn’t expect rumble support at all so it was a welcome surprise when I first clocked it, even if it is just the standard definition variety included (no counting ice cubes on this one).

Astoundingly, 8BitDo also managed to pack gyros into the N30 Pro 2. This is usually the first thing to be left on the cutting room floor by third parties so it’s really nice to see the effort made to accommodate those who prefer to aim with motion controls. I dislike motion aiming but it felt on par when briefly comparing it with the Pro Controller in Splatoon 2’s Inkopolis Square.

(Almost) everything for half the price

Really, the only thing lacking featurewise from the N30 Pro 2 is the NFC reader required for reading Amiibo. When you consider 8BitDo’s controller is almost half the price of Nintendo’s at around £34 / $40, that’s a pretty good deal.

The funky shoulder button configuration is sure to put some people off, and that’s understandable. 8BitDo clearly considered that too as other controllers in their line-up (namely the SN30 Pro and SF30 Pro) elected for the more conventional L, R, ZL, and ZR layout. I think it’s worth checking those controllers out if you’re not sure you’ll get along with the N30 Pro.

For me, 8BitDo’s N30 Pro 2 will be an accoutrement to my Pro Controller. It’ll be reserved for playing 2D games, when I want something a little smaller to sling in my bag, or for when we boot up Mario Kart at parties.

The N30 Pro 2 is just another tool in my kit. A tool that makes games like Moonlighter and Celeste an absolute delight to sink hours into. That’s exactly what I expected it to be, and the nostalgia I get each time I use it will always make me smile.