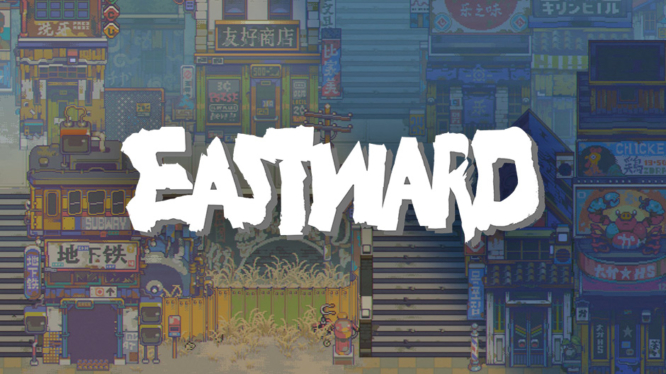 Eastward, from Shangai based development studio Pixpil, was first announced for Nintendo Switch during August’s Indie World stream. It’s a game that I fell in love with the second the trailer started playing – the art is gorgeous and the gameplay had top-down Zelda vibes. I knew it would be right up my alley, and after playing the PC demo at EGX 2019, I’m happy to report that I still feel the same way.

Eastward mixes cute and bizarre with its high quality, colourful pixel art, off-beat character designs and run-down dystopian world. The most obvious comparisons I could think of whilst playing were Earthbounds quirky tone/characters and the top-down action-adventure gameplay of The Legend of Zelda: Minish Cap.

The EGX demo kicks off roughly 3 chapters into the game, allowing me to explore two locations: a slum-like village and a murky swamp filled with enemies. I controlled two characters: John (a man brandishing a frying pan as his main weapon) and Sam (a mysterious young girl with psychic powers). The two characters can be played independently or controlled as one unit, though the active character can be swapped at any time. This mechanic served as the basis of many of the puzzles I was tasked with solving, but the characters unique abilities come into play during combat and exploration too.

John’s frying pan attack serves as a competent weapon for combat as well as for breaking obstacles. It can be charged up to deal extra damage to enemies, but this attack also propels him across rancid waters on makeshift rafts by hitting white and orange buoys. He can equip a powerful cannon-like weapon that you can swap to and has the ability to drop bombs.

Sam’s psychic blast can stun enemies but also destroys large bulb-like plants that block her path. Those same plants also come in a white and orange variety, much like the buoys I had come across before. Being the MENSA level genius that I am, I eventually realised through much trial and error that John’s charge attack would have the same propulsion effect as the aforementioned buoys when standing on a raft. These two mechanics had to be mixed and matched to traverse the swamp by ensuring I had the right character equipped to do so.

At the end of the swamp level, I defeated a large skeleton boss and so ended my time with Eastward. The demo served as an excellent teaser, though it was one that was clearly no-where near completion. Placeholder item text and unimplemented chests were strewn across the demo, but considering it isn’t due to launch until next year, this early EGX build doesn’t sour my expectations.

I spoke with Tommo, a member of the development team as I played, batting away his apologies for unfinished content in true British fashion. I was able to learn a little bit about the game’s development along the way too. Starting in 2015 with a team of 3, Eastward is now being developed by 12 of Pixpil’s staff. They are aiming for a 2020 release via publisher Chucklefish and hope to launch the game simultaneously across Steam and Nintendo Switch, providing Nintendo’s approval process allows it. There are elements of crafting, cooking and weapon improvement planned too, though I didn’t learn much about this as it is still in development.

Overall, I found Eastward to be charming, inviting and gorgeous to behold. I was already on board, but trying this demo build has cemented my purchase 2020 for sure. This is definitely one to watch out for.

Disclaimer: Although Eastward will be available on Nintendo Switch, the EGX demo was only available as an early PC build.