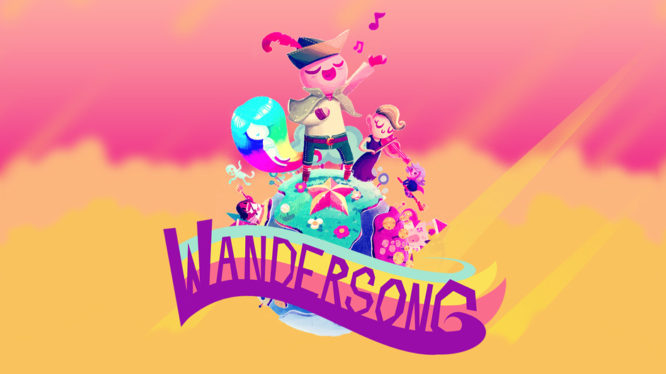 I’m sat here staring at a blank screen, the little cursor blinking at me awaiting words to fill it, racking my brain for a way to convince you to play Wandersong without completely spoiling it.

Wandersong feels to me like the kind of game that’s best enjoyed if you go in blind; knowing little about what’s to come. Having seen only announcement trailers prior to booting it up on my Switch I didn’t know much about it but did have some expectations.

As I played though, it became apparent that the game wasn’t what I thought it was at all though. Perhaps it was just my poor interpretation of the trailer but I totally thought I was going into a shallow platformer with some music stuff slapped on top for that USP. However, I couldn’t have been more wrong.

An unlikely hero and his cohorts

Wandersong’s story centres around a bard who desperately wants to be a hero. After being visited by an angel in his dreams, he soon learns that the world is coming to an end. In order to save the world, our unlikely hero will need to obtain pieces of the “Earthsong” from Overseers in the Spirit World.

That story of the world ending and the attempt to save it by the young bard you control is told mainly through dialogue. As you globetrot, you’ll meet dozens of unique and interesting characters. Some will help you on your quest, some won’t, but each seems to have their own personality.

These personalities come across in the way they speak. Not audibly (as there are no recorded voices) but instead their personality comes across in the writing and is further enforced by the typeface used to display their speech on-screen. If you’re talking to a big, brash guy then expect to see a bold font but if it’s a classy lady then something more sophisticated will be presented instead.

It’s lovely attention to details like this that I really appreciated when playing Wandersong. Another one that stood out was the main protagonist’s outfit matching the environment he was in or when he got scared the volume of his singing decreasing. Things like this that make it clear that Wandersong was a passion project for solo developer, Greg Lobanov.

Aside from the story, Wandersong does offer some fun and unique gameplay. Flicking the right stick will bring up a colourful wheel split into eight segments. Each segment represents a musical note and will trigger “Lil’ B” to break into song.

This one element is used in a variety of ways. You might be singing away a ghost at the beginning of the game in Langston, cleaning a garden of leaves, or even moving magical platforms with just the minstrel’s voice. 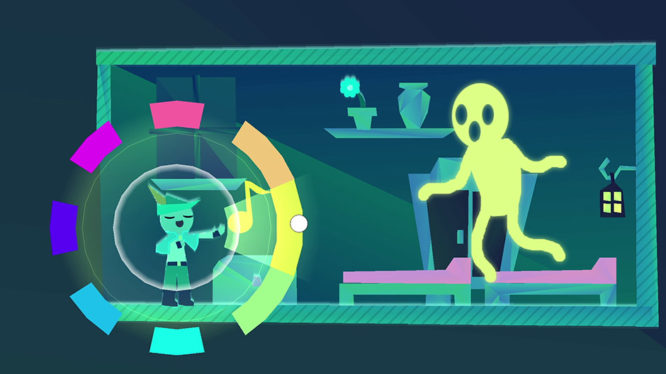 Wandersong splits itself up into “acts”, with each act offering something new both in terms of story and gameplay. A new puzzle or paradigm is often presented with no instruction whatsoever, leaving you to figure out how to solve it and continue on.

The game does a great job of teaching the player about these gameplay elements naturally. To begin with, visual cues are used to indicate that the music wheel is needed to continue on your journey but as the game progresses these cues become less and less frequent.

Some of the puzzles were easy to figure out, others took a little more work but none of them had me scratching my head. It’s probably the right balance in a game where puzzles are an aside but some players may be disappointed by how quickly they can be breezed through.

Thanks in part to the game’s globetrotting plot, Wandersong is able to experiment with a whole host of environments. Everything is presented in a 2D paper-like appearance that gives off distinct South Park vibes and colour is used generously throughout. It’s definitely a striking look that suits the game well. In places, however, the flat appearance of the game did cause me some problems.

It wasn’t always clear that stairs were stairs or which platform could be jumped on due to the lack of depth. This led to a few repeated platforming sections of the game which is a mild annoyance at most.

On the whole, Wandersong is a joy to control. Controls are just a stick (or D-pad) and two buttons for the most part. There’s also the musical wheel that can be pulled up with the right stick but I think my favourite control is powered by the L button. Hold it down and the bard will dance away (even at the most inappropriate of times).

Additional dances can even be obtained throughout the game and you can cycle through them with ZL and ZR. It’s a pointless little thing that brought many smiles to my face while playing through.

More than meets the eye

There’s a lot more to Wandersong than is visible at first glance. What comes across as a cutesy platformer gives way to a charming and at times emotional story delivered by a cast of interesting characters. Couple that story with the game’s unique, musical gameplay and you’re onto a winning combo.

2018 had been lacking a new story-centric game in the vein of Night in the Woods and Wandersong fills that slot well. I had a great time with the game and if you’ve been hankering after a new adventure, then don’t let Wandersong slip past you.

Wandersong offers a charming and, at times, emotional story told through interesting and unique characters. This story is reinforced by well-written dialogue, unique gameplay mechanics and some fun (if not a little easy) puzzles presented in a striking visual style.