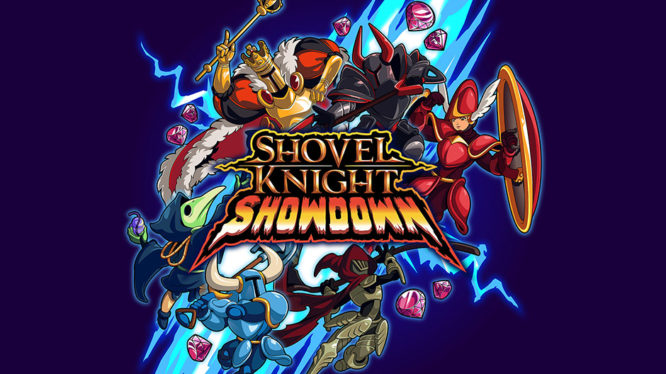 After six years of development, dozens of awards, and even a few amiibo, Yacht Club Games have finally completed development for Shovel Knight. With it’s two final expansions, King of Cards and Shovel Knight Showdown, the indie juggernaut has finally ended the journey they started with Kickstarter backers all the way back in 2013.

Shovel Knight Showdown’s take on the party fighter genre shifts the IP in a fresh new direction, to surprisingly addictive results. Yacht Club Games has gone above and beyond to send off Shovel Knight with a bang, and it was well worth the effort. Showdown is easily the most fun I’ve had with Shovel Knight since the original campaign and it’s a game I definitely plan to enjoy with friends for years to come. 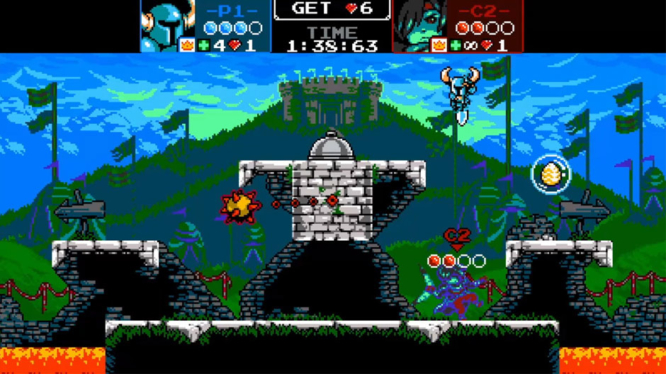 Shovel Knight Showdown’s gameplay is a potent combination of Shovel Knight’s tight 2D platforming and the fun, frantic nature of party fighters like Super Smash Brothers. Players will draw immediate parallels between the ways Showdown and Smash handle things (like items and Story Mode progression) but as much as it takes inspiration from other party fighters, Shovel Knight Showdown feels wholly unique from other games in the genre.

Players can be eliminated by losing health, falling to stage hazards (like lava or bottomless pits) and by getting trapped offscreen in autoscrolling levels. Most levels allow players to walk freely from one side to the other, with some will even allowing you to fall through the bottom of the screen and come back through the top without losing a life. This gives each of Showdown’s 30 stages a unique feel and strategy for victory (if you choose to play with stage hazards on). Level design is tight and often adds to the intensity of a match, especially in story mode.

Items that influence the course of battle include bombs, a magnet which pushes enemies away, a time slow, a laser that fires automatically, a lightning bolt which strikes every opponent, and eggs which summon familiar Shovel Knight mobs to assist you.

The cast is varied in their movesets and nearly every character in the Shovel Knight cannon you could want is playable. While I’ve obviously found my favorites in my 15+ hours with the game, the  cast feels pretty solidly balanced. Every fighter has strengths and weaknesses that give them an edge in one game type or another. 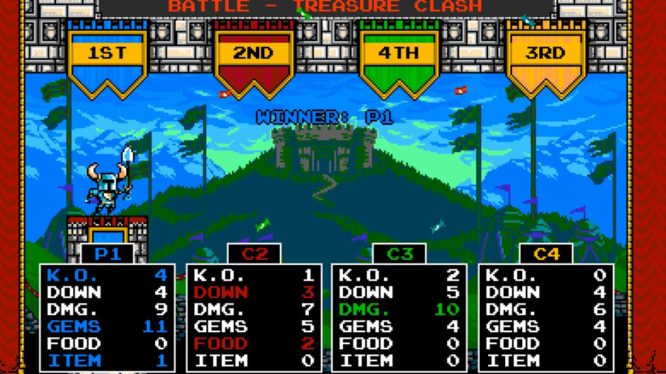 Showdown offers a ton of match types, each of which is highly customisable. The most common are Treasure Fights (which have combatants racing to see who can collect a certain number of gems) and Showdowns (which are classic stock matches). These two simple archetypes allow for a surprising number of game modes once you start playing with Showdown’s deep customization features. Other match types or gameplay modes include a punishing break the targets challenge, Joust-style fairy fights, and themed matches like bomb duels, one-hit KOs, heavy wind, and major knockback.

If you’re the type of player who likes to experiment with these options without having to navigate a ton of menus, the randomization options in multiplayer mode do an excellent job of keeping things interesting. In most game types, time is a big factor and sudden deaths aren’t uncommon, but almost no one match will go longer than 3 minutes. With so many variations and the lightning-fast pace of matches, it gives Showdown that “one more game” special sauce.

The game’s Mario Party-style reward system means that many multiplayer game types reward the best player, which is not necessarily the last player standing. Points can be earned for scoring kills, collecting gems, and not losing lives. This focus on objectives over kill counts is one of many things that gives Showdown a unique flavor. 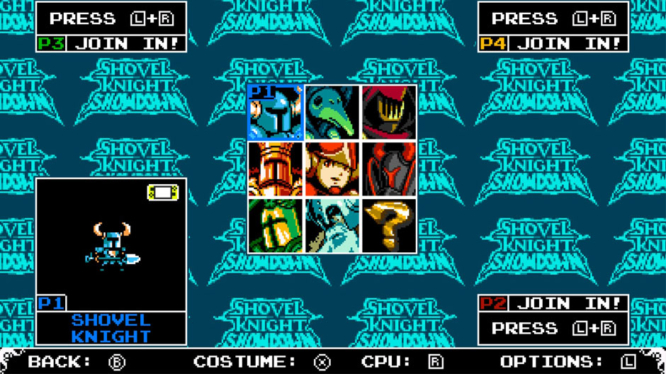 In both single or multiplayer settings, Showdown offers an enormous amount of replay value. With 20 playable characters, 30 stages, multiple battle types, and a robust and challenging single-player story mode, there’s a LOT here (even for veteran Shovel Knight players). There are 56 unlockables, which can be earned through completing in-game “feats” (ranging from completing story mode with different characters to pulling off fancy tricks) or by playing multiplayer for a set amount of time.

Showdown’s story acts as a prequel of sorts for most of the main cast, but Yacht Club does a good job of making it unintrusive for players who want to focus on the action. Players are tasked with completing nine stages, which include a break the targets challenge and a three-staged boss battle. Challenges are semi-random so there’s nearly infinite replayability in single player. Stage three is always a story beat, stage five is always the target challenge and stage 9 is always the final boss run, but otherwise, each run is a fresh experience.

Story mode is also available to play in co-op, and it seems the game may be balanced with two players in mind, as even Medium difficulty can be quite challenging. Opponents are ruthless and aggressive, and the odds are often stacked against you. On top of all that, in true arcade fashion, if you run out of your six continues, it’s game over and you’re starting back at level #1.

If you’re a newer player looking to shake off the rust, or want to unlock every character fast, Easy mode is an extremely forgiving way to experiment. Otherwise, sharpen thy shovel. 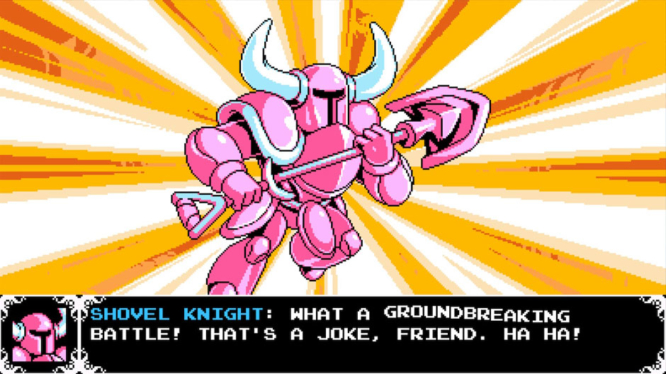 For my money, Yacht Club couldn’t have sent Shovel Knight off on a better note than Showdown. The game is fun, tight, and oozing with style. The art is beautiful, the new musical arrangements are stick-in-your-brain good, and the gameplay loop is infinitely satisfying.

Yacht Club couldn't have sent Shovel Knight off on a better note than Showdown. The game is fun, tight, and oozing with style. If you haven't picked up Shovel Knight yet, now's the time. If you need an excuse to go back, Shovel Knight Showdown is certainly it.

Pocketing another entry in the beloved indie.