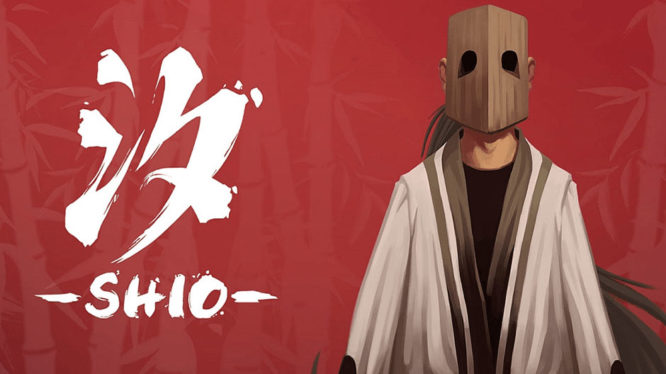 At its best, SHIO is a challenging momentum-based platformer with a focus on the fairly novel concept of upward motion. At its worst, the game is a frustrating, punishing and confusing experience. Unfortunately, it’s the latter of those two things that dominate the vast majority of SHIO’s content.

The game follows the story of a mysterious masked man traversing his way through what appears to be the dream version of his actual ancient Chinese village. I say it seems because thanks to its esoteric presentation and what I can only assume is a poor translation of Shanghai-based developer Coconut Island Games’ original script, even after rolling credits I’m still not quite sure what actually happened in SHIO. The game tells its story in a variety of ways, including cutscenes, character dialogue and collectable items and letters which in turn unlock journal entries that fill in gaps in SHIO’s story.

Bad translation aside, SHIO’s abstract approach to storytelling just isn’t very interesting. If I had to choose one word to describe the game’s narrative, it would be intrusive. Cutscenes are long, drawn-out affairs that force the player to slowly crawl from one end of the scene to another.

Character dialogue will often pop up onscreen during sensitive platforming sections where you already can’t see because of the game’s camera (more on that later). The worst offender is SHIO’s journal entries, which are so poorly optimized that there are blatant errors like single letters or pieces of punctuation hanging on to the next line. What we’re left with is a story that wants to have weight, but feels thin. This is a platformer about momentum! If you’re going to take the time to take me out of the game to tell a story, it should be one I care about and it should properly optimised.

While most platformers traditionally focus on advancing across a screen from left to right, SHIO’s claim to fame is its use of chain jumping mechanics to move your character up the screen. The game doesn’t feature any enemies to fight and your character’s only ability is to jump and bounce off of a variety of lanterns. Aside from chain jumping, the game is very focused on momentum and pixel-perfect accuracy. Levels leave very little room for error, and even less so if you choose to play the game on its Hard mode called “Deep Sleep.”

This means that trial and error are all part of the experience, and Coconut Island Games is deserving of praise for making it incredibly easy to get back into the action. Death is handled the same way as titles like Super Meat Boy or Celeste where there’s no penalty and no load time involved with death.

One of SHIO’s biggest strengths is taking a page out of the World 1-1 book from the original Super Mario Bros. The game does an excellent job of slowly introducing new mechanics to players and gradually ramping up how often you’re seeing them and what other obstacles they’re interacting with. Despite being gentle about introducing new obstacles, difficulty ramps up quickly and SHIO is a fairly challenging game even for seasoned players. There’s a real sense of satisfaction that comes from completing a particularly challenging level or beating the average time (known as the Tiger Score) presented at the end of each run.

From a pure gameplay perspective, SHIO’s cardinal sin is how often it makes you wait. For a game about bouncing and momentum, a frustrating number of SHIO’s mechanics require the player to stop and wait for the right time to run, jump, bounce or drop.

The biggest praise I have for SHIO is that its focus on upward motion makes it stand out from most other platformers. However, because of the how the game’s camera operates, this is often as much of a hindrance as it is an innovation. During gameplay SHIO’s camera is locked on your character who is always at the centre of the screen, meaning it’s impossible to see any upcoming obstacles that aren’t immediately in front of you.

Coconut Island’s answer to this problem is to allow players to look at a blueprint for each level by pressing the action button on any checkpoint. This ends up being an unelegant solution because it kills the game’s otherwise stellar momentum by forcing the player to stop playing. It also doesn’t actually solve the issue of being able to plan your route because the blueprint is a static image. This means that players are still unable to learn the patterns of obstacles like spinning blades and fireballs without dying dozens and dozens of times. 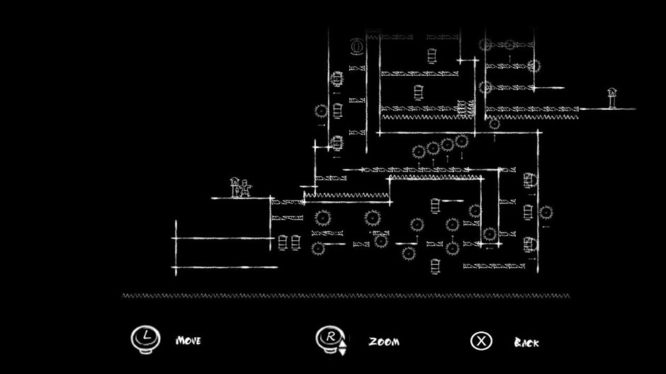 Far too many levels become nothing more than bouncing from lantern to lantern while trying to avoid obstacles that you hopefully remember the rhythm to from looking at the blueprint or dying multiple times. Every platformer has an element of memorization to it, but this system makes it so players aren’t empowered to apply the lessons the game has taught them. Even simple levels can take multiple runs because of the need to scout out patterns. The problem is made even worse when SHIO introduces mechanics that intentionally impact visibility like rainfall and spacial tears that cover traps.

Camera issues aside, SHIO feels good to play. Your character’s movement is fluid and even bouncing on lanterns somehow avoids feeling too floaty in shorter segments. SHIO is at its best when it mixes segments of upward chain jumping with traditional L-R/R-L movement and downward, drop based segments. It’s a shame because even the simple ability to tilt the camera one screen forward could really make all the difference in the world. By SHIO’s final chapter, levels had become so punishing that the game’s trial and error nature became more frustrating than fun.

Pay no attention to the man behind the mask

For a game so intent on telling you a story SHIO’s art and music direction don’t do it many favours. Aside from the game’s often gorgeous background art, SHIO’s assets feel largely generic and indistinct. The game’s soundtrack is relaxed, atmospheric and mostly pleasant, but never quite matches the often tense nature of the gameplay. Even the game’s protagonist is a nameless, faceless man in nondescript clothing. SHIO lacks a sense of style and identity that games need to stand out from the pack.

SHIO also wracked up a number of other minor complaints during my time with it. For some strange reason, “X” is the action button…sometimes. In other menus, most notably the level select, “A” or “B” both work as accept while “X” becomes back. This led to numerous instances of me accidentally reloading a level when I was trying to check my progress. This quirk became particularly frustrating for me because of the issues I experienced with SHIO’s autosave feature. Despite showing a “Saving…” in the upper right-hand corner after every death, I regularly lost minor amounts of progress in SHIO when reloading the game. 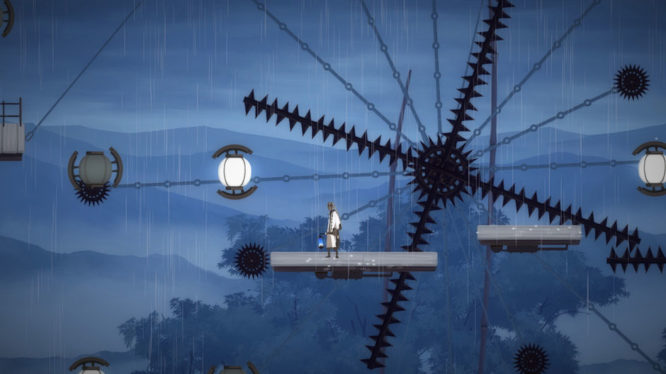 I also experienced a glitch that, when loading my save, caused my character to be stuck in the game’s starting area. Resolving this issue required me to exit to menu and reload my save file. A similar issue appeared when trying to load up Deep Sleep mode – where the game would load and I could hear my character’s movement, but all I could see was the background image. However, this glitch required I shut down the game entirely to get back into my save. Thankfully, technical issues during my play-through were limited to minor saving and loading glitches. SHIO never presented any issues involving slowdown or frame rate drop, even when a screen was flooded with multiple moving obstacles.

Ultimately, SHIO is a game with a lot of ambitious ideas that never quite live up to their potential. It’s by no means a bad game, and at times, it’s even a good one. But, I have a hard time recommending it when there are so many quality platformers that look, sound and play better available on the Switch for the same price.

SHIO is a challenging and ambitious platformer with a unique hook and an emphasis on momentum. However, the game's camera, intrusive story and lack of identity keep SHIO from living up to its potential. If you're a fan of hardcore platforming and have already played hits like Shovel Knight, Celeste and Donkey Kong Country: Tropical Freeze, SHIO's unique focus on upward motion through chain jumping may be worth your time. If you're a casual platformer fan looking for that next indie gem, the Nintendo Switch's library simply has better offerings.