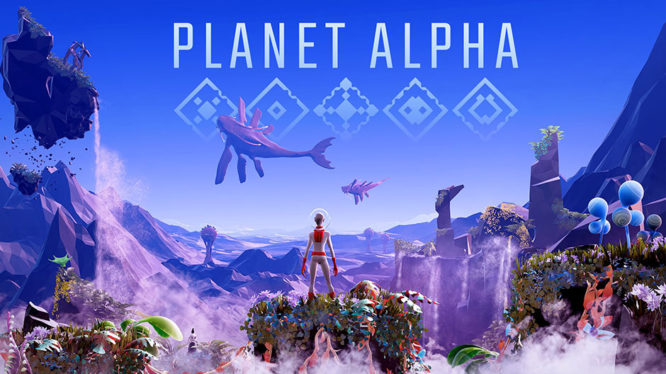 Planet Alpha poses itself as this story of intrigue and challenges the player to “unlock the mysteries” of the planet you find yourself stranded on. I think the problem is that this isn’t an accurate representation of what the game actually is.

If you view the game as a 90% a platformer with 10% environmental puzzles thrown in for good measure then you’ll have a good time. Once I’d rid my brain of the idea that there would be some grand story told over the course of my playthrough I certainly did.

That’s not to say there is no story here. Except, it’s more a premise than a story.

You play as an adventurer that wakes up stranded and alone on an alien planet. Throughout the game, you’ll come across countless enemies that will block your path. With no way to counterattack, Planet Alpha forces you to find a way around using environmental clues to find the right path.

Bend time to your will

Finding that right path sometimes involves solving an environmental puzzle. This might be moving some blocks in order to reach a higher ledge, looking for another route above or below you or using the game’s unique time manipulation mechanic.

From the get-go, the game’s day/night cycle is visible. As the game progresses you learn of your character’s ability to control it. To begin with, bending time to your will is just used at specific points in the game but as you run and jump through the world it’s used more and more.

For example, the fauna of Planet Alpha is affected by the solar cycle and certain plants may only reveal themselves at specific points in the day. Platforms may also move at night allowing you to bridge the gap you’ve been stuck trying to cross.
It’s an interesting mechanic that is used well in places but I think the game could make better use of it at times. Once you realise you have access to it whenever you like, it becomes quite easy to hold down ZL and ZR and solve puzzles without much thought.

An environment for every occasion

Visually, Planet Alpha is an attractive game. It makes great use of light and the deluge of environments it presents look stunning throughout the in-game solar cycle.

As you venture through, you’ll be thrown into a number of different zones that each feature their own unique traits. Outdoors you’ll need to make use of the plant life to survive by hiding in the long grass to avoid enemies. Deep underground near lava, you’ll need to avoid geysers of fire, and in the man-made areas, you’ll need to use panels to operate elevators and doors.

Perhaps the most interesting areas are those with low gravity that I’m hesitant to spoil too much. It changes the physics of the game and provides a nice respite from the usual platforming Planet Alpha offers.

There’s enough variety here to keep you engaged and I didn’t find myself getting bored due to the same of platforms being recycled as is common in other platformers.

Not quite peak performance

The atmospheric soundtrack is nothing to really write home about but I guess it does add a little depth to some of the game’s scenes. Transitions between tracks are… Less than smooth. Music often just cuts short and switches to the next piece when changing areas. It was really the only time I took notice of the soundtrack which likely isn’t a good thing.

There are a few performances hitches on the Switch with the odd framerate dip and the game often running below native resolution (both in handheld and docked modes). It’s nothing to be too concerned about as it doesn’t detract from the gameplay and could easily be improved with a patch.

Despite the minor framerate issues, Planet Alpha does an excellent job of getting you back into the game quickly when you die. Death is par for the course, with you often having to memorise a course of action in order to progress to the next checkpoint. Just a few seconds after missing that ledge and you’re back in business.

Planet Alpha is worth exploring

The game starts off slow, with some repetitive platforming and block-after-block to move. Eventually Planet Alpha offers up some interesting and unique (yet challenging) gameplay, and I think if you’re a fan of platformers and environmental puzzle then it’s worth a look.

There were certainly times I was frustrated or felt like kills were a bit cheap as there was no way I could see what was coming, but overall Planet Alpha features some great level design and interesting mechanics. If you don’t go into it expecting untold mystery and suspense then you’re likely in for an enjoyable experience.