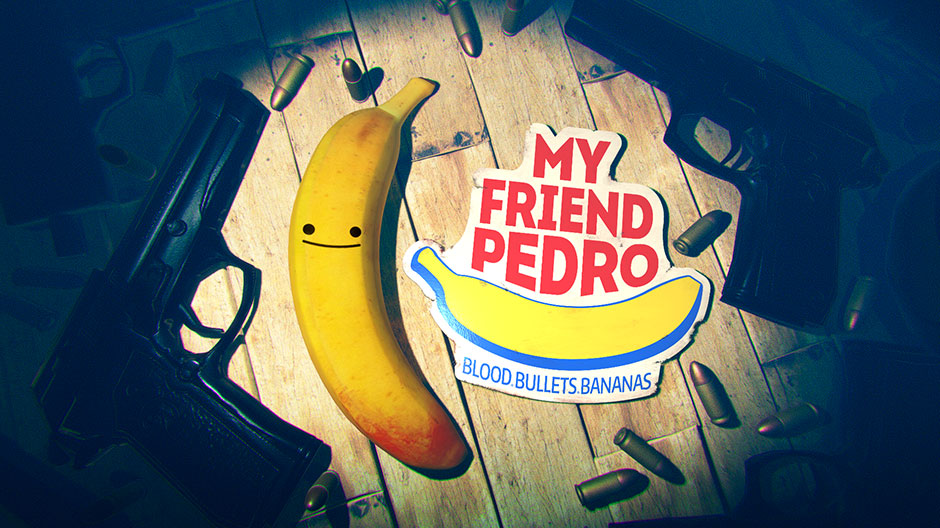 The first time I saw My Friend Pedro, at Nintendo’s Spring 2019 Nindie Showcase, I was drawn in by the game’s Matrix-style combat, but even more so by its goofy banana mascot: the titular Pedro. I immediately saw the potential for humour in a dark, hyper-violent, shoot ’em up being undercut, or at least contrasted by, the commentary of a cartoonish character like Pedro.

Unfortunately, as much as developer DeadToast Entertainment delivered on the tight, arcadey shooting promised by trailers, publisher Devolver Digital’s excellent marketing material is far funnier than the game itself. My Friend Pedro is weird, edgy, and at times a little generic, but when it leans into its wackier side, the game really shines.

A Tale of Two Games

My Friend Pedro is based on an earlier DeadToast free to play Flash game called MFP: My Friend Pedro, that Adult Swim Games published back in 2014. The arcadey spirit of it’s far more simplistic predecessor shines through, but the new MFP is an improvement in every way, except for its story.

I’m not one to complain about a simplistic story as a framing device for a more gameplay-focused experience, as long as it has a distinct identity. The Mario and Zelda series have both been proving this formula works since the NES days and at this point there’s no trope more well-worn than “be the hero, rescue the princess”. However, these franchises ooze personality so we keep coming back for more.

In contrast, My Friend Pedro’s story is a shallow, superfluous framing device that does very little to enhance the player’s experience. You play a flat, voiceless assassin with no name or character traits, but are asked to care about his backstory and connection to a similarly bland cast of villains. Your banana sidekick Pedro is good for a few laughs here and there, but his inclusion is limited to one-liners at the beginning of a level and the odd cameo when the player racks up a high score. Rather than giving players something unique to grab on to, his inclusion feels forced, like an excuse to justify the zannier bits of the game that don’t fit in MFP’s otherwise gritty world.

What you’re left with is a game with a real identity crisis. Is the main character’s story supposed to be taken seriously or is this all a joke? Ultimately, neither tone sticks the landing and My Friend Pedro struggles to find its voice.

I realise that at this point it sounds like another negative review from me, but I genuinely enjoyed My Friend Pedro a lot more than my gripes about it would lead you to believe. And that’s all thanks entirely to the MFP’s very satisfying gameplay loop.

As I’ve already mentioned, My Friend Pedro is a 2D sidescrolling shoot ’em up with a Matrix-style time slowing mechanic where players have a surprising amount of control over their character’s movement. Mechanically, MFP is floaty, but whenever I failed, it was because I was unprepared or reckless. I never felt like my mistakes were a failing of the game’s controls. I found it simple and fluid to get a combo chain going and look cool while doing it. Players can kick off enemies, dodge bullets mid-air, and shoot enemies in two directions at once to keep their combos going. 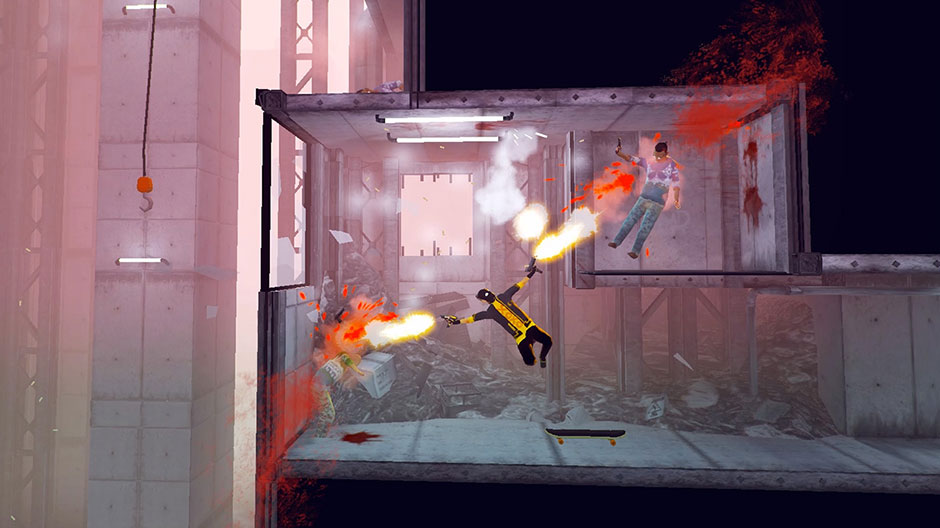 My Friend Pedro does an excellent job of keeping things interesting by introducing new weapons or gameplay mechanics in nearly every level. This not only keeps you on your toes during your first playthrough but greatly enhances the game’s replayability factor.

These new mechanics include obstacles like ropes, zip lines, and disappearing platforms and tools for traversal or combat like skateboards, frying pans, and oil drums. There are also a number of one-off levels that throw the standard left-to-right progression out the window by having you do things like shoot enemies while riding a motorcycle or falling off a building.

In addition to all the shooting, MFP features some light platforming and puzzle segments, which succeed to varying degrees. Since the game’s movement is so focused on the slow-motion shooting, its platforming mechanics are pretty rudimentary. This makes the platforming-focused segments of the game feel a bit tacked on without enemies to shoot. Puzzle segments are more effective because they often occur while enemies are trying to take you out, so they enhance the tension rather than take away from it. My Friend Pedro is at it’s best when it focuses on combat, with puzzles and platforming sprinkled in to up the ante and make you work harder for your high score.

Most of My Friend Pedro’s art direction and music aren’t anything to write home about, but there are a few truly standout moments you won’t see in the trailer. In the game’s third chapter, your character is transported to Pedro’s pocket dimension and these are easily the best parts of the game. While the rest of MFP mostly finds you running through grey environments to kill groups of thugs, bounty hunters and sewer-dwelling video gamers, the Pedro levels are bright, colourful, and far more creative for reasons I won’t spoil here. I found the game at its best when it leans into the absurd, and it’s baffling that Pedro’s chapter is less than half the length of nearly every other chapter. 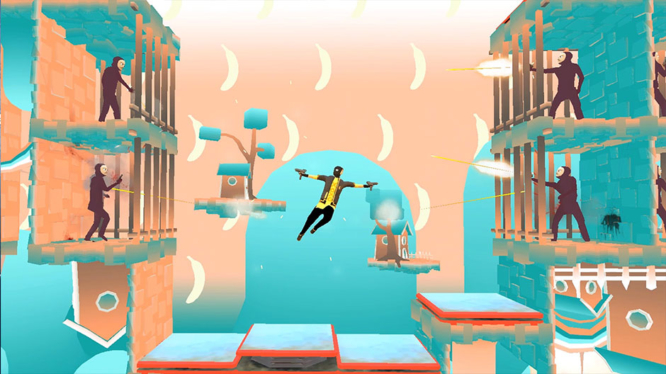 The length of MFP feels just about right, but the final chapter does overstay its welcome somewhat. After the game shows it weird hand, the last thing I wanted to do was head back into another bland, grey level. However, the game does a good job of encouraging you to play levels again and again to beat your high scores, and it’s rewarding to experiment with the toys MFP gives you.

For me, the most disappointing thing about My Friend Pedro is that it’s so close to being great. Yes, it’s a fun game to play and there’s a good amount of content for its asking price, but very little outside the Matrix-style gunplay loop is particularly compelling or stand-out.

My Friend Pedro is a game that I liked but wanted to love. As a result, it’s tough to recommend to anyone who isn’t explicitly in the market for an arcadey shoot ’em up simply because there are so many other compelling indies out there competing for your attention. If you’re a fan of the genre, My Friend Pedro has a ton to offer you mechanically, but you if weren’t sold on the action you saw in promotional material, this one’s probably not for you.

My Friend Pedro is a frantic and fun side-scrolling shoot 'em up, but very little outside the Matrix-style gunplay loop is particularly compelling or stand-out. If you're a fan of the genre, My Friend Pedro has a TON to offer you mechanically, but if you weren't sold on the action you saw in promotional material, this one's probably not for you.