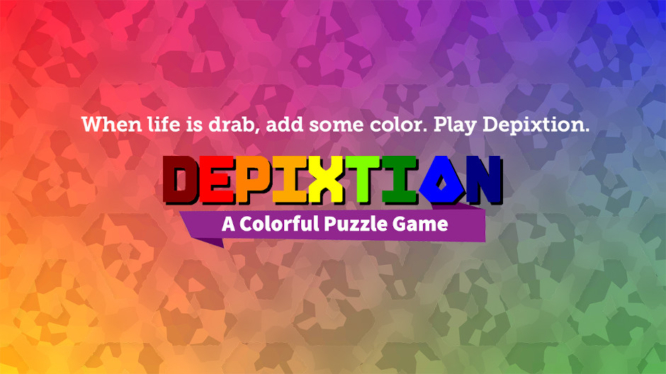 Playing through Depixtion, I could tell that (just like myself) the team at DevHour are big fans of nonograms. Since diving into my first Picross game last year, it’s impossible not to draw parallels with the title that defines the genre, but Depixtion does add some fun new concepts to the usual formula. Debuting the title in June of last year on Steam, this new take on Picross is finally making its debut on Nintendo Switch.

Nonograms are one of my favourite forms of logic puzzle. Essentially, you’re given a blank grid with numbers beside each row and column. These tell you how many groups of squares are filled in and how large the groupings are. The end goal is to make a particular image by comparing the rows and columns to distinguish where these groupings are along their axis. Groups of the same colour cannot touch, and thus must have at least one blank space or another colour between them. Depixtion, in particular, has 2 colours per board.

A game with layers 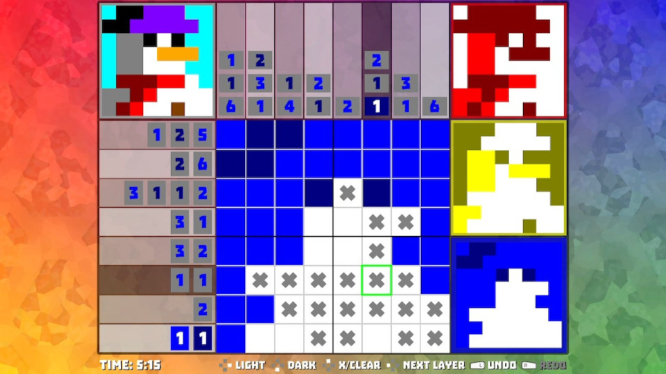 Traditionally, when you complete a nonogram puzzle, your colours are filled in automatically. This means you can see the shapes you created become an actual picture, regardless of colour. Depixtion has a clever mechanic that takes this one step further though, by dividing each image into three puzzles (representing red, yellow, and blue colour layers). As you complete each layer, the individual colours combine and stack up to reveal the true image behind them all.

Depixtion isn’t just another a game where you make shapes to create a picture. Instead, it offers a Picross-style puzzle game where you paint the picture, pixel-by-pixel, watching your different coloured layers come to fruition. Rather than a puzzle title, Depixtion almost feels like a drawing game. Offering 96 unique images (288 puzzles) each with their own beautiful pixel artwork, Depixtion is a blast to play through.

Starting the game for the first time, I went through the tutorial and was pleased to find that it was quite competent. While it didn’t go above and beyond, teaching me how to solve a puzzle, it gave me a good run-down on finishing a level. Beyond this, there’s also a robust pool of tips for new players and veterans alike in the menu. Despite having played and beaten nonogram games before, I often found myself reading through the pool of tips to gain an extra edge in terms of puzzle completion.

Unfortunately, Depixtion is not without its drawbacks. Games of this nature typically provide a way for the player to note what patterns are available, however, Depixtion lacks any such system. Instead, I had to frustratingly make attempts at patterns, remembering which parts were certain, and undoing my work over and over. With each puzzle being a little more frustrating to get through, this soon cemented itself as the game’s biggest drawback. Having to rely almost completely on memory makes many of the levels harder than they actually need to be. In my opinion, including this feature should be standard in all Picross-style games.

Players aren’t left completely in the dark though, as there is a hint feature that tells you which squares have an incorrect answer in. These hints come at the price of a star though. Each puzzle has one star, which you lose by using a hint. Meaning each complete image has a total of three stars to bag. Ultimately I ended up only using these hints once or twice, opting to implore other strategies to solve my errors. I was excited to try and keep every star I could.

Stars at the end of the puzzle are displayed on the game’s puzzle selection menu, alongside your best time to complete it. It was fun completing a puzzle and seeing how long it had taken me to beat. Often, I’d be surprised at the deviation in the time taken between completing layers of the same image.

The main menus have a nice, childish design with a focus on making basic shapes. Each puzzle is displayed on a card with an appropriate colour from the picture itself. It’s a little slow to scroll through all these images, however, being only able to scroll through the full list bidirectionally. I’d have definitely preferred an alternative way of scrolling through and filtering board sizes.

Visually, each puzzle grows weary on the eyes, being largely red, yellow or blue hues. I feel as though it may have been a good idea to offer a grey-scale mode, so you’re not just staring at an abrasive wall of red, yellow, or blue near the end of your puzzle.

Depixtion’s soundtrack stops just short of non-existent. Containing just two songs: one for the menu, and one for in the game. With the later puzzles taking me nearly 20 minutes per layer to complete, this meant just listening to a single, seemingly endless, looping track.

For the first bit of playtime, I really enjoyed the main track. It’s fun and lo-fi electronic sounding with a really good, upbeat melody. After five or six hours though, I’d grown particularly weary of it.

The track became something of an earworm, unable to leave my head. About 15 hours in, I found myself humming the music even when not playing. It became something of a painful memory, one which rivals my morning alarm. After around 40 hours, I finally caved and turned the sound off completely. It simply wasn’t worth it at that point. 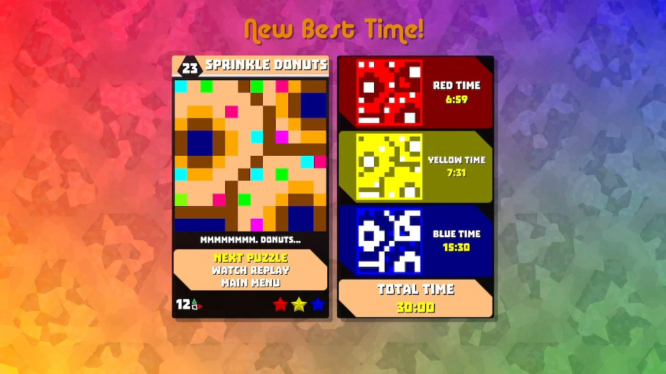 Nearing the end of my time with Depixtion, I found myself delighted with the difficulty, as it scaled up extremely well. Some puzzles I’d spend upwards of forty minutes playing as I attempted to discern the next clue. Struggling, I even found myself at times resorting to using the image to progress. The difficulty involved was really refreshing of a puzzle game.

Gradually scaling up from the easiest boards at four-by-four, to 24-by-24 size boards, the steady increase in size ensured that I was challenged, but never suddenly overwhelmed. It was even enjoyable seeing just how long each layer had taken, as I formed the full picture.

Upon completion of your full image, Depixtion offers you a nice animated replay of every move you made. It shows each layer individually, as well as your layers all being built together to form the final image. Unfortunately, I could not return and see those animations at a later time. Thankfully, the Nintendo Switch has its capture ability so I could just capture a video when it appeared, however, this solution is far from optimal.

With each passing level, Depixtion continually offered me a wonderful level of challenge. While I went through reasoning the results of a puzzle, I often had to refer to the in-game “check mistakes” option to ensure I wasn’t making more errors than I could later revise. Something which I ended up finding that to be somewhat of a hindrance. In my last few puzzles, I would instead choose to complete the puzzle, finding it more optimal to reason out my mistakes afterwards with the full board completed.

Overall, it took nearly 55 hours for me to clear the 288 puzzles Depixtion had on offer. While the music was lacking, and there were no quality-of-life features to speak of, the puzzles themselves were fun and interesting. The images you create are definitely more fun to complete than in a standard Picross-style game, mainly thanks to the colour-layering mechanic. Watching the image itself come together as you progress is a joy and while Depixtion won’t likely be anyone’s game of the year, if you’re a fan of Picross, this will be a pleasant play for you.

While QoL features are barebones, Depixtion is a worthy pickup for Picross fans. With a nice twist on the usual formula and nearly 300 puzzles to tackle, Depixtion offers fans of the genre an enjoyable experience. Just make sure you bring your own music.