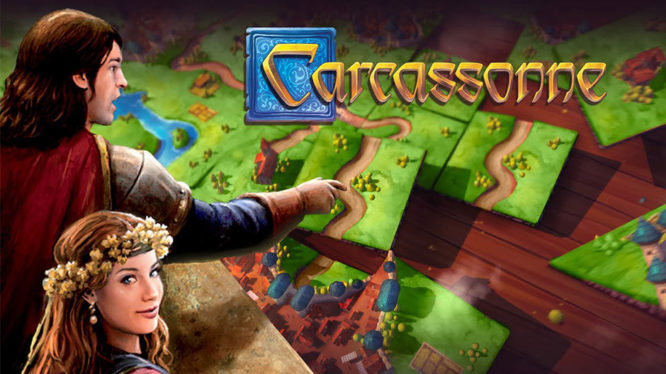 I love Carcassonne. Like really love it. It’s one of my all-time favourite board games, I own several expansions and I’m constantly hopping into the version I have installed on my phone. My family even got so sick and tired of hearing me ask “do you want to play Carcassonne?” that it’s a banned phrase whenever I visit my folks.

I realise that you might be thinking “err… what is a Carcassonne?” right now, so let me take a moment to explain.

Carcassonne is a tile-based board game where players take it in turns to build cities, roads, fields and cloisters. As each tile is placed, the medieval landscape expands and players can opt to place a “meeple” to mark a city or road as theirs. Once a road, town or cloister is completed a score is determined by counting the number of tiles it spans across.

The game continues until all tiles are placed onto the table and the player with the most points wins the game. It sounds simple – and it is – but a lot of strategies come into play.

For example, fields aren’t scored until the very end and can clinch victory at the expense of losing a meeple for the entire game. Players can also attempt to steal a city or road from someone else or block them from being able to finish what they started by placing tiles in the way.

Due to the simple mechanics, slow-burn gameplay and strategy involved, Carcassonne is one of the rare board games that translates well into a video game. It’s no surprise then that I was excited when Asmodee Digital announced they were bringing Carcassonne to the Nintendo Switch. My favourite board game on a console I can take anywhere, what more could I ask for?

Booting up the game for the first time was like seeing an old friend. Of course, official licensing is in place so logos, tilesets and imagery are all spot-on. The soundtrack when you land on the menu is also decidedly fitting – medieval vibes and just the right amount of chill.

Unfortunately, the music starts to wear thin fairly quickly, as the same track seems to be on an infinite loop throughout the game. You soon start to feel like you’re stuck next to the guy that only learnt one song for the renaissance fair. Unless you really dig it, I’d recommend a quick hop into the menu to turn it off.

Three of Carcassonne’s expansion packs came bundled with my download: The Abbot, The River, and Inns & Cathedrals. Each adds new and unique elements to the game (like the double-meeple from Inns & Cathedrals). There are dozens of expansions available for the Carcassonne board game so I hope to see some more added as DLC in the future. I’d particularly like to see my personal favourite, Traders & Builders added as well as some tile swaps from the Winter or Star Wars editions.

I started out with a single player match against the computer with “The River” expansion enabled to test the waters. It’s here, when you actually venture into a game, that the walls of Carcassonne start to crumble.

The game defaults to a pseudo-3D isometric view that I naively presumed could be rotated. Unfortunately, that’s not the case and it’s a locked angle that just really didn’t work for me. You can, however, flick between isometric and overhead views at any time from the in-game menu. I played mostly in that overhead mode and the graphics held up well.

Most of my digital time with Carcassonne has been spent with TheCodingMonkey’s excellent iOS app and the Switch version stacks up well against it. The Nintendo Switch port uses tiles from the refreshed version of the game and the animations when placing them are an appreciated embellishment.

Performance seems not to be an issue either. I didn’t encounter any real slow-down in matches but due to the simplistic nature of the game, I didn’t expect it to be pushing the Switch’s graphical prowess anyway.

Panning around the play-space is done with the left stick, and the right stick controls the zoom level. Tiles can be rotated with the Y button and everything else is controlled by A. It’s pretty much what I expected when docked but for some reason, the cursor moves at such a glacial pace. It’s not much of a problem when you’re just starting a game but as the board grows in size it becomes a chore getting from one side of the screen to the other.

Aside from slow movement, Carcassonne completely blocks you from being able to move around the board when it’s not your turn. I usually want to be planning my next move or second-guessing what other players are up to. Something which becomes pretty difficult when your viewport is restricted like that. The game also implements a time delay before AI players make their moves. This “fake thinking” can get a little tedious when playing with more than one computer, as you’re often sat there just waiting for them to make a move.

I did find myself being reminded of hitting the wall in Snake on my old Nokia 3210 whenever it was my turn. The controller emits an awful buzz, and while I appreciate the nostalgia, an option to disable or tone down the vibration in a future update would be nice.

Okay, but what about in handheld on the Switch’s lovely touchscreen?

Well… I’m sorry to be the bearer of bad news but there is no touch support whatsoever in Carcassonne on Switch. When you consider that Asmodee also made the Android version of the game with full touchscreen controls it’s frustrating that they didn’t put the effort in to make it work on Nintendo’s platform.

Otherwise, the game plays identically in both handheld and docked modes. Controls are the same on both dual Joy-Con and Pro Controller configs and there were no noticeable graphical or performance changes when playing portable.

There’s no Internet in Medieval times

Once I’d completely destroyed “Easy Neighbour 2” I wanted to pit my strategy skills against a real person. After all, that’s the real reason I was excited about Carcassonne on Switch in the first place.

My heart sank when I got back to the menu and couldn’t find online play anywhere. I can’t be the only one jumping into the game on the presumption that I’d be able to play with friends in other countries. Both the PC and Android versions of the game from Asmodee include online multiplayer, making its omission from the Switch particularly disappointing.

There is still local multiplayer though, with support for up to four players with different controllers or up to six players by passing a single controller around. Single Joy-Cons are supported in multiplayer too, with zoom in and out re-assigned to the SL and SR buttons. 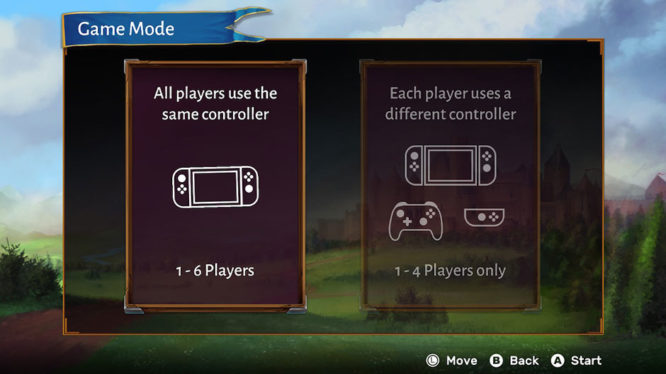 The most fanatical need only apply

It’s really hard for me to recommend Carcassonne on Switch to anyone other than a total die-hard fan. Even then, I don’t think it will be long before you’ve beat even the strongest AI the game has to offer.

The lack of online multiplayer will be a dealbreaker for many wanting their Carcassonne fix on Nintendo’s console and rightly so. Local multiplayer is always great to see but other than the odd impromptu game in an airport, it’s unlikely that I’d ever play with a friend in person on the Switch. I feel that at that point I might as well get the board game out and make an evening of it.

Touchscreen controls really should be implemented here too. It’s not that the game is unplayable without them but the handheld experience would have been infinitely more enjoyable had they been included.

The cons outweigh the pros for me here and as it stands, Carcassonne just feels like it needs a little longer in the oven. With online, touchscreen support, and a little more refinement to the controls it would be a solid game. In the meantime, my trusty board game and iPhone version will continue to serve me well as they have done for years.

Carcassonne on Switch does a good job of capturing the essence and feel of the game. While the omission of touchscreen controls is disappointing, it's the lack of online multiplayer that really limits the game's appeal.

As both multiplayer and touchscreen support are available on Asmodee's other versions it's particularly frustrating to see them missing on Switch. With a little more time in the oven, Carcassonne on Nintendo Switch could have been great.

Carcassonne, Pandemic, Catan and more on the way!