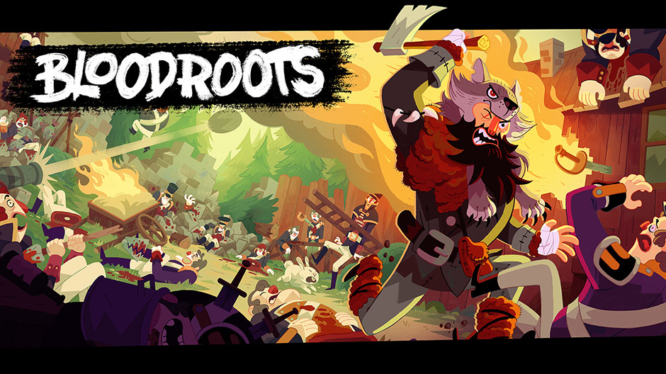 Bloodroots first hit my radar during the Indie World presentation in March 2020. Described as a quick-paced action game set in a Weird West world, its style and flair for combat had me instantly intrigued. While the preview’s punchline was that you could slay your enemies with a carrot, as Mr Wolf rode a barrel and swung a wooden ladder, this title proved itself to a bit more special than it originally let on.

Bloodroots follows the story of Mr Wolf, who, after suffering his violent murder, returns to life to seek revenge on his killer. With a constant bloodlust, players must bash and slash various enemies, progress through stages, and seek vengeance on Mr Black Wolf.

The opening sequence meandered by design. Mr Wolf wakes up in the snow, and I had to crawl to the east against a blizzard. This was a good way of starting the game, as it allowed me to get my bearings and settle into the world. As I progressed further, my movement began to pick up. I was now walking, shortly followed by a full-on sprint. Eventually meeting a town gate, I promptly entered. However, it wasn’t sanctuary from the storm that I found, but a horrific scene of slaughtered citizens and a town ablaze.

At the other edge of the town, a cutscene began. I, Mr Wolf, was cornered by a crew of former allies. Shooting me without hesitation, they ensured my death by following up with a good old fashion axing. Indifferent to their barbarism, I had known this would be a story of revenge. Witnessing the death I’ll be taking revenge on was the next logical step to me. Nonetheless, I did find myself squeamish at this savage use of my weaponry against me. Mr Wolf followed by reviving, suffering no apparent damage from his wounds. Spending the next eleven hours meeting and slaying my enemies, each one satisfyingly unaware of their impending slaughter. 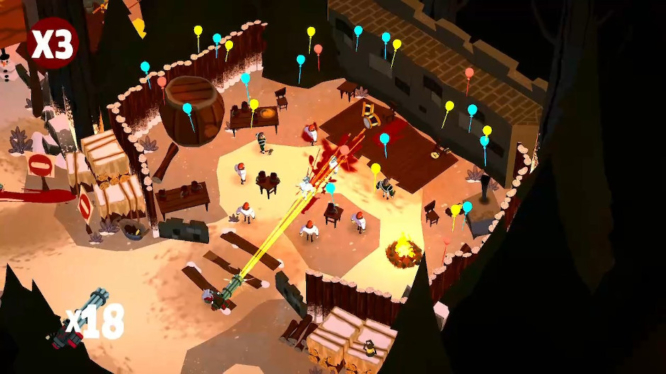 Bloodroots’ gameplay is wonderfully simple. It’s top-down action at a pace that you need to work to keep up with. Running around attacking your enemies, you proceed from one area to the next. You jump, pick up items, and slam them against your foes. While carrots will perform a simple chop, katanas and knives will lunge forward, slicing and dicing any enemies in your path. Ladders spin atop your head, slowing your descent should you fall, while you force fish over an enemy’s head as you punch their heads off. There’s no limit to how many ways you’ll go through an area with all the creativity the game allows. Some levels do suffer from having few viable routes to complete. I, however, found the gameplay fun with experimenting, evaluating different ways to complete sections optimally, then returning to older routes thereafter with new ideas.

Trying different weapons like the bow and arrow, and a harpoon that drags you to the enemy being killed was beyond satisfying to use. Dying in a level dozens of times, I would pick up and try different interesting weapons. I found joy seeking secrets that could potentially aid my endeavours. Fireworks hidden inside a smashed building or a unsuspecting barrel laying off to the side, both of which allowed me to develop new strategies and retry routes until I could complete them. Each run is iterative of the last up until I defeat all my enemies and move on to the next area.

Bloodroots forces the player to use variation in their playstyle. You might prioritise killing enemies that fire lasers, so you don’t have to deal with them later. However, swaths of weaker enemies can easily appear, overwhelm, and ultimately slaughter you. I suffered through many dissatisfactions, repeating some section countless times until I could figure out a strategy to best it. This frustration all comes to an end when you finally overcome the challenge, instilling a sense of victory and a desire to pressed on.

Sectioned into three acts, Bloodroots contains five levels per act, each consisting of several checkpoints to surpass. Ending a level, I would view a leaderboard that counts points based on the time taken to complete the level, my weapon variety, and the mobility I’d had thanks to my weapons. There’s a leaderboard to compare scores globally and against friends. I had so much fun trying to reach the top of the board that I’d play the same level multiple times, edging myself closer to the top.

Without skill, you cannot proceed 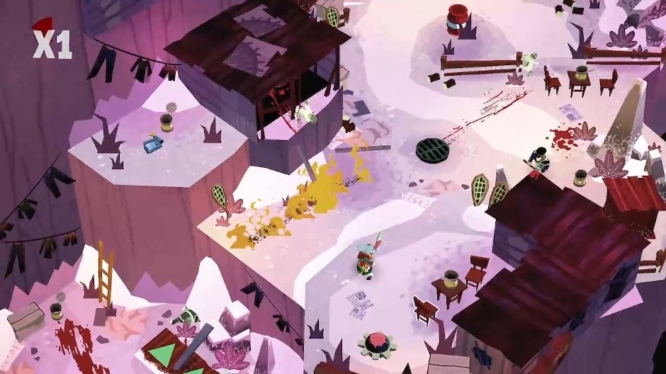 As the game was making me improve, upon completion, I went back and played some previous levels and speculated how I’d had such difficulties with completing them. What had previously taken me twenty or twenty-five attempts I could now achieve in just a few, if I would die at all. Bloodroots had subtly taught me to become better at the game until I could progress. Despite some of its mindlessness, it made me complete each section in a systematic manner, a trait I appreciate.

Each level gets unique music, with banjos and electric guitars abound. It’s clear that inspiration is drawn from the wild west, yet despite my abhorrent distaste for country music as a genre, I found myself loving the tracks included here. Each one gave me a sense of impending danger and urgency, putting me in the mood to reach the next checkpoint.

Bloodroots presents its narrative at the end of each level, progressing closer to each killer. Asking the same question, Mr Wolf begins these interactions asking “Where’s Mr Black Wolf?”. Funnily enough, rather than acknowledging his words, the murderer would instead discuss how much success they’d had since killing Mr Wolf. They’d discuss making it big in the city and becoming wealthy enough to afford all the henchmen I’d defeated. Each character had their own story and vision for what they considered freedom, lending personality to them, and urgency to their endeavours.

The game presents its characterisations through the liberal use of comedy. The murderers of Mr Wolf would quip as though they were best friends, before complaining that he was no longer dead. This was always something I found funny. It was clear they had been friends beforehand, but that endless disagreements leading to their murder plot had changed that. Meanwhile, anger and hostility permeated the air as the characters feelings undermined their words. I found myself slightly underwhelmed with the individual character’s stories, but the gameplay’s action was fun enough to make me keep coming back.

A bloodbath from start to finish 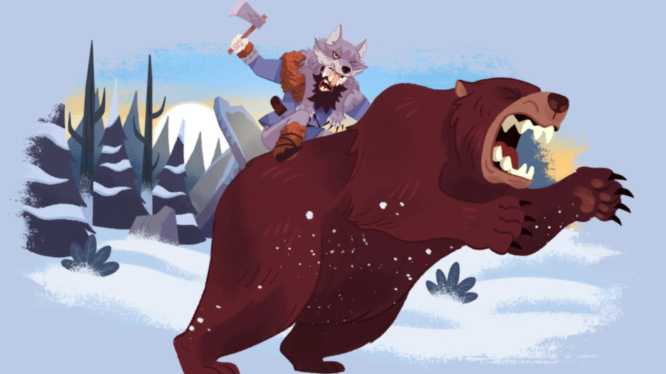 At its core, Bloodroots is a frenetic action title that never lets up. Fantastic visuals with a fun artistic style make it gorgeous to play. The framerate is mostly steady when fire effects aren’t surrounding you, with these framerates dipping into what feels like the low 20s. Even when it was at its target 30 FPS while running through areas, I was moving so quick the gap between frames at times became visible. This made some sections unnecessarily difficult to complete, as I’d have to predict motions with only one or two frames of information to base this off of. To add insult to injury, load times aren’t exactly fast, taking as long as 30 seconds to load into a level.

Initially, I found myself bothered by the animation of Mr Wolf as he ran around. His legs stretched far behind him when he ran, at a distance far longer than they should. Part of the game’s art style is based on stretching and squishing characters in the physics engine. Still, at the end of an area, with bodies strewn about, it was quite disconcerting to find necks and arms that reached far into an abyss deep below. Filling these scenes with ugly bits of stretched out bodies undermined the aesthetic of cartoon blood and dead bodies.

While I spent over eleven hours playing through the story of Bloodroots, it doesn’t end there. In addition to leader-boards, throughout the story, there are a plethora of different hats Mr Wolf can find. Receiving these from bosses I defeated, it was compelling returning to parts I’d already completed and trying them out. Each hat provided a unique ability or would start me off with a weapon based on what I had worn. Allowing me to have more versatility in the tactics I used for sections I’d previously completed. My favourite was one that gave me the ability to hover when I jumped, in part because it helped me stop falling off ledges so much.

Bloodroots was a fantastic trip through the Weird West, and one I want to keep returning to so I can increase my leaderboard ranking. The story felt a little bit flat, but (despite some performance issues) the gameplay was full-fat. Each moment felt like a puzzle I needed to solve, it kept me cautious and driven. If you’re looking for a new game on the eShop, and you like speedrunning, or quick-paced action, Bloodroots is a game you simply need.

Some highly enjoyable top-down action with leaderboards and lots of replayability. While there are some mild performance issues, if you like speedrunning and quick-paced action then definitely don't sleep on Bloodroots.