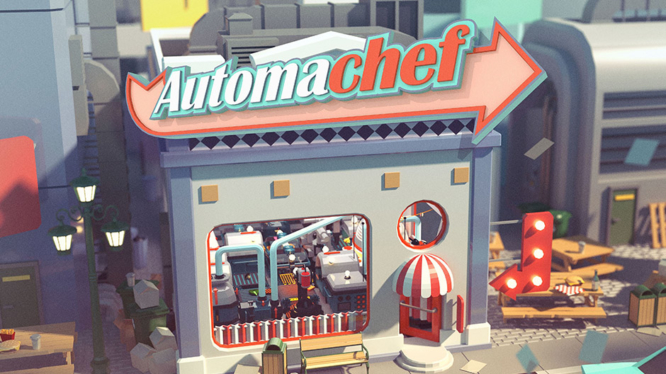 Automachef is a resource management puzzler that has the player build a series of autonomous kitchens to fulfil food orders in a variety of settings. The game is somewhat reminiscent of Overcooked, but instead of shouting at friends and family to pass you the tomatoes, Automachef has the player build production lines to fulfil increasingly complex fast food orders from customers.

Working under an eccentric boss (who you may develop a sneaking suspicion is not the human he so frequently reminds you he is), you place and program machines such as ingredient dispensers, mechanical arms, conveyor belts and grills to build a fully autonomous kitchen under the confines of budget, space and power. 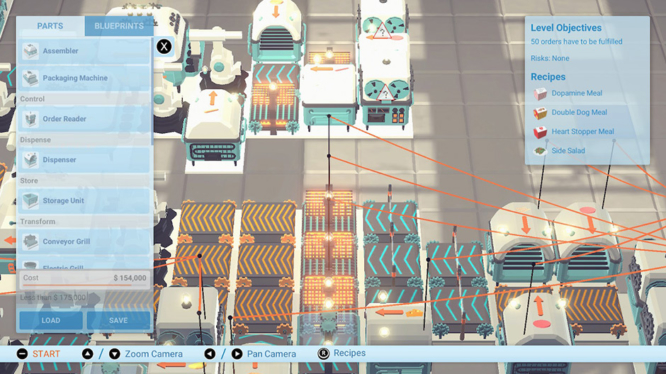 Though the underlying concept of the game is straightforward (dispense, process, cook and assemble ingredients to create a meal), Automachef cleverly places limitations on the development of each kitchen. Each level has three objectives: (1) deliver a specific quantity of meals, (2) using below a target amount of ingredients and (3) below a target amount of electrical power. As well as these targets, each level has a fixed space in which machinery can be placed and a financial budget that must be adhered to, and the pressures of customer service are represented in the form of a reputation percentage that decreases when customer orders are delivered incorrectly or not on time. Reaching 0% reputation or failing to meet the quantity of orders required immediately results in a fail in all campaign levels.

As hard as you want it to be

As listed above, each level comes with a series of limitations that forces the player to think strategically about each and every machine they place, the space it takes up and the function it provides in the production line. However, at a minimum, each level can be beaten by meeting only the target quantity of orders delivered. This means that the game is simultaneously accessible to those seeking a more casual and less challenging playthrough while also providing a serious puzzle to those who rise to the challenge and meet the optional objectives. 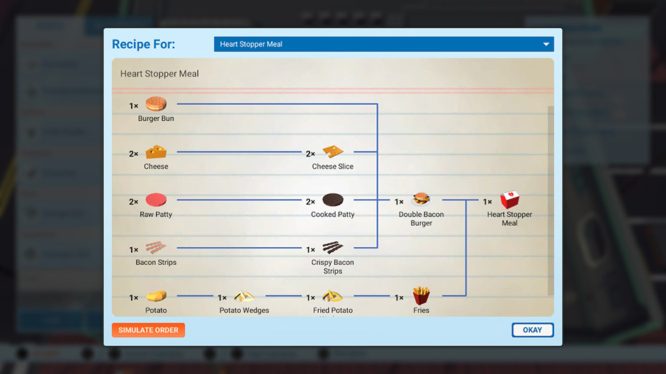 Despite having a choice in how difficult you want the game to be, even meeting the minimum requirements presents an interesting challenge – with some levels taking over an hour to build, test, troubleshoot and fix. Luckily, the game includes quality-of-life features that means this process never gets boring or repetitive; the blueprint function allows you to save production lines for specific recipes from past levels and import them into new ones and you can simulate orders to isolate and test specific parts of your kitchen (which becomes especially important when getting to levels where there can be many different order types being placed).

The game is also effective at punishing laziness and inefficiency, adding a new dimension of challenge in each level. For example, some levels will have orders of fries alone as well as combo meals that contain fries. While it may be possible to just run two production lines for each order type, the game’s emphasis on space, power and budget forces the player to come up with resourceful and imaginative ways to meet customer orders efficiently; a production line that works is simply not enough to beat every level.

Automachef is very well-paced, with each level in the campaign gradually introducing the player to new orders, machinery and techniques. An important addition to your catalogue of the machines is the Order Reader, which you can program to detect when an order has been placed and sends the appropriate commands out to machines, allowing your kitchen to be more efficient.

While the earlier levels are based around simple production lines of one order type that can be made from few ingredients, the game slowly ramps up the challenge by introducing more complicated orders such as combo meals, as well as a different delivery hatch depending on whether the food has been ordered to eat-in or take-out. While the later levels do get very challenging (some even requiring me to get out a pen and paper and plan my kitchen out first), spikes in difficulty never feel unfair, levels never feel impossible and any new techniques and machinery that are worth knowing are introduced in funny tutorial levels with your quirky boss. 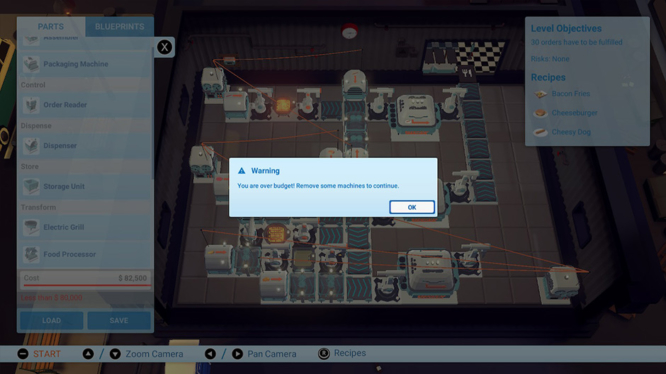 A full menu of game modes

There is a lot of variety across Automachef’s 30 campaign levels; food orders range from burgers to loaded fries, you may encounter a rush hour or a visit from a food critic and you’re at risk of disasters like salmonella, infestations and machine breakdowns. These force you to consider things beyond just the objectives of the level, such as separating raw ingredients from the rest of the production lines and placing machines that can manage fires in high-risk areas. This means that every level remains interesting because of the unique combination of setting, orders and potential problems encountered. The game’s music, composed in-house by the developer, is comprised of a range of different albeit similar tracks. Despite this, it never got boring or repetitive and provided calm and optimistic background noise to what can be an otherwise stressful game.

As well as the expansive campaign (which alone can easily take upwards of 15 hours), the game has two other modes that provide even more content. Contract mode offers you the chance to run your own kitchen building company, allowing you to choose which contracts to accept, get paid to fulfil the contract specification and reinvest your profits into your company to access more advanced machinery. The Test Site mode offers a sandbox kitchen building experience, allowing you to create with no limitations on space, budget and power and without the pressures of customer service. This mode can be useful in building blueprints to import into the campaign levels as well as test out new ways of producing recipes.

Despite being a well-written and challenging puzzle, Automachef on Switch has a few minor problems. Firstly, there appears to be no option to select multiple machines in a production line and move them simultaneously despite this feature being available on the PC version. This means that moving finished production lines around to maximise space (an important process across all levels) can become tedious when only being able to move one machine at a time. Despite the kitchen being a grid-based system, the game forces you to navigate using the analogue stick which lacks the precision of the D-Pad and often results in mistakes. The game also suffers in handheld mode, with the font size being too small as well as the two zoom options for the bird’s eye view of your kitchen being either too close or too far out.

Automachef is a top-tier simulation puzzler that, despite its minor problems, has a huge amount of content for its price and will surprise you by how well-written and funny it can be. The game requires patience and trial-and-error but provides an unbeatably rewarding experience if you persevere. Even the most frustrating levels end with an amazing feeling of satisfaction once you finally see your kitchen working that leads to the “just one more level” mentality that will keep you awake and playing for hours.

While this genre of game is not for everyone, Automachef excels at everything it tries to achieve and, despite some minor problems, presents hours of fun across a variety of challenging game modes.