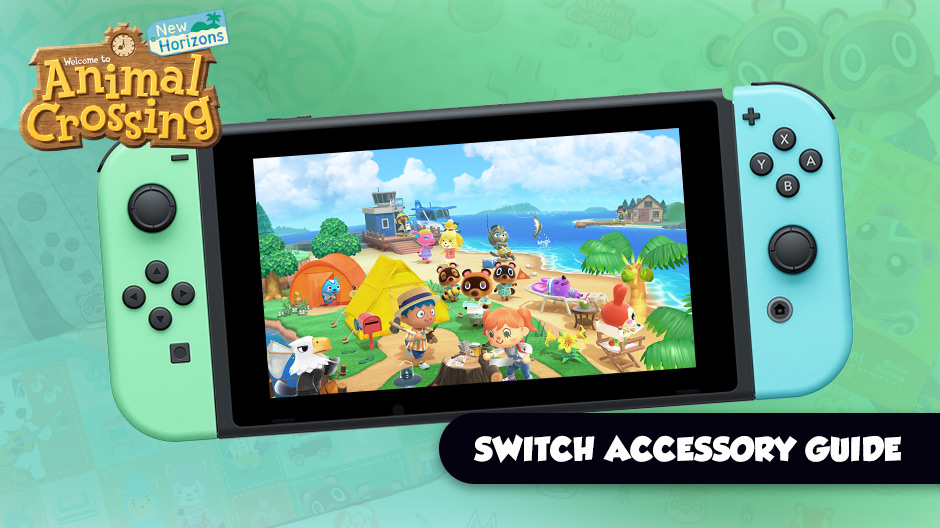 Tom Nook is back and this time he’s jetting Animal Crossing fans off to create their very own personal paradise. So what better way to celebrate than kitting your Nintendo Switch out with some Nook Inc. merchandise!

We’ve rounded up the best Animal Crossing Nintendo Switch accessories around, so you can sit back, relax, and enjoy what the island’s got on offer. 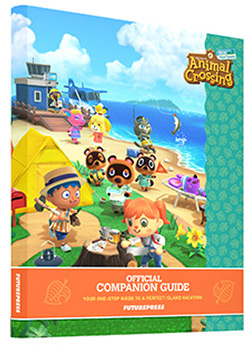 Published by FuturePress, the official New Horizons companion guide is crammed full of useful tips and references to help fans fully enjoy their new island life. Described as a “premium guide” book, it packs a whopping 432 pages of information and photos.

As a special bonus, it also comes with some high-quality bookmarks and access to an online event tracking calendar tool! 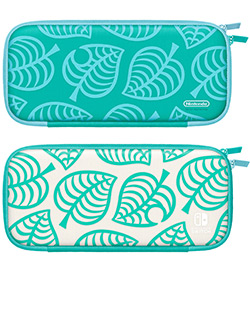 Designed to fit the standard Nintendo Switch model, the Animal Crossing Aloha Edition carrying case is produced and sold by Nintendo themselves.

The outer design showcases the AC Aloha pattern (as seen on Tom Nook’s shirt) in 2 different colors. Fancy zips aside, the case also packs a built-in stand, slots for 5 game carts, and comes with a screen protector. 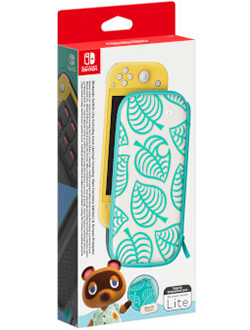 If you’ve got a Nintendo Switch Lite then fear not, as Nintendo has also created a Switch Lite version of the Animal Crossing Aloha carrying case!

Just like the standard case, the outer design also features a double-sided tropical island leaf pattern, there’s storage for game carts and you’ll even get a Switch Lite screen protector!

Available from: Amazon US | Amazon UK 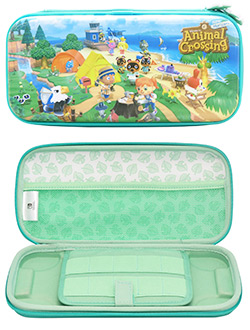 Officially licensed by Nintendo and produced by HORI, this cleverly shaped case includes indents for the Joy-Con triggers to safely sit inside.

Designed to be compatible with both the Nitnendo Switch and the Nintendo Switch Lite, the AC Vault Case can store up to 10 game carts and even includes an accessory storage net on the upper lid. 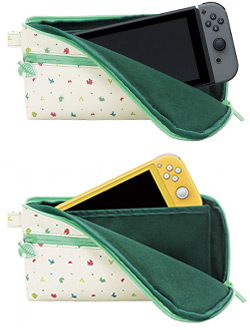 This soft slip-in case can apparently fit either the Nintendo Switch or Switch Lite models inside. It certainly looks the part with its cute patterned design, but definitely isn’t high on the “most protective cases” list. 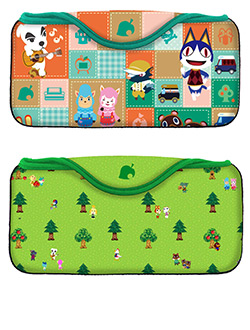 Another Japan-exclusive, the Animal Crossing themed Quick Pouch collection by Keys Factory offers a soft elasticated case to store your console in.

Available in two different designs, unaffectionately referred to as Type-A and Type-B, these flexible cases are only designed to fit the standard Nintendo Switch model though. 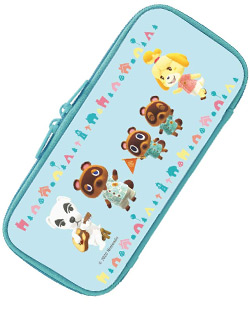 It definitely seems as though Japan are being spoiled for case options, as Max Game’s Smart Pouch line will also be seeing an Animal Crossing design.

Design to fit the Nintendo Switch Lite, this little zipper case includes soft fabric on the inside to help avoid your Switch Lite from being scratched when out and about. 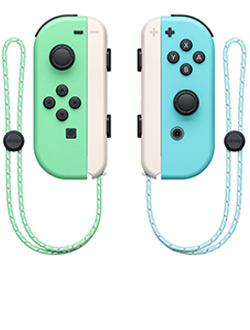 Only available in the West as part of the New Horizons console bundle, these pastel coloured Joy-Cons bring a touch of island life to your Switch.

Those in Japan can order a set of Animal Crossing Joy-Cons separately from the My Nintendo Store. Unfortunately, for folks elsewhere, Nintendo won’t ship them outside of Japan. 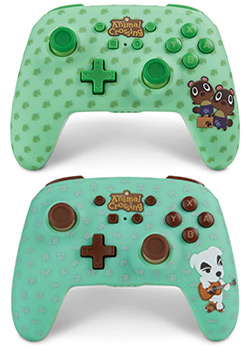 If you’re looking for a more traditional style controller for your trip to the island then Power A’s enhanced wireless switch controllers have got your covered. 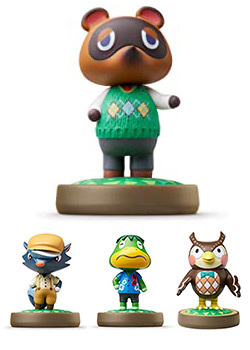 Nintendo has confirmed that Animal Crossing: New Horizons will support amiibo figurines from the franchise. 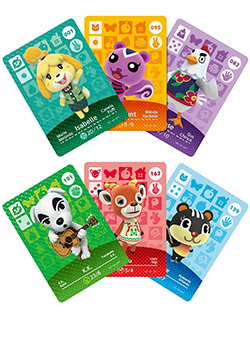 Just like the Animal Crossing amiibo figurines, New Horizons will also support amiibo cards released for any of the past titles.

Each Animal Crossing card comes with a character design on the front and a small amiibo chip built inside!

Unlike the amiibo figurines, there are a lot more characters available in card form, so you’re sure to find your perfect islander. 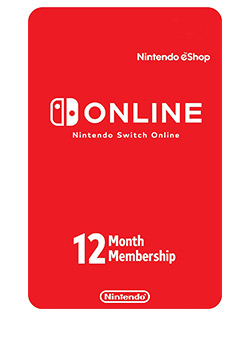 If you’re planning on visiting a friend’s island online, or want to live on the same island as 8 of your friends and family, then you’ll need to make sure you’re a member of Nintendo Switch Online.

Membership can be purchased directly from the Nintendo eShop or as a digital download code from Amazon and many other retailers. 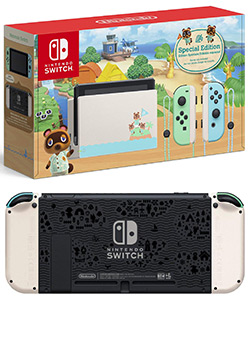 The European version even includes a copy of Animal Crossing: New Horizons! 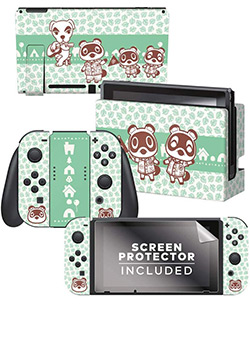 Officially licensed by Nintendo, this USA made skin is scratch resistant and leaves behind no residue when removed.

This one is designed for the standard Switch model. 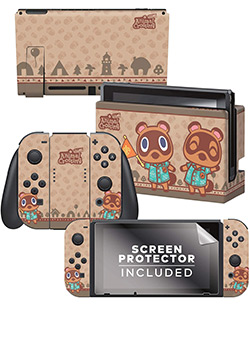 Looking for a bit more colour in your Nintendo Switch skin? Then this Timmy & Tommy full Switch skin bundle has got you covered.

Just like the previous decal set, this too is officially licensed by Nintendo and features the same scratch resistant surfaces from manufacturer Controller Gear. 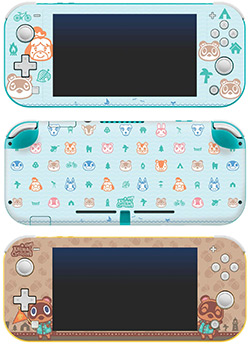 If you’re looking for an Animal Crossing skin for your Nintendo Switch Lite, then Controller Gear has you covered aswell.

These officially licensed Animal Crossing skins are available in a variety of different designs and feature the same “Easy on – Easy Off” no residue materials as their bigger brothers.

Perfect for showcasing your fandom on the go.

Truly the Bell of the ball.