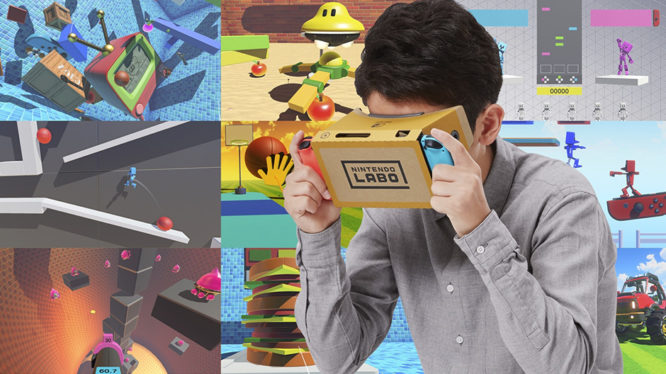 Following their announcement of the Nintendo Labo: VR Kit earlier this month, Nintendo has provided fans with some additional details about what the to expect from their latest cardboard venture.

Pitched as a “family-friendly” VR experience, the Labo VR Kit boasts more activities than any of the previously released Labo kits to date. Once built, the Toy-Con VR Goggles forms the core unit of all the other VR Toy-Con creations. Simply slide in your Nintendo Switch to use the goggles by themselves or combine it with other Toy-Con creations to experience or variety of games on offer.

Unlike other VR solutions, Nintendo’s offering doesn’t include a head-strap and relies solely on the player holding their creations in place while playing. Which may not sound ideal for long periods of time, but fits perfectly with Nintendo’s philosophy of providing a shareable and social VR experience that can be passed from player to player.

In addition to using the headset directly, other players can also interact with the Toy-Con games without the need to own another Nintendo Switch. In certain games, simply grabbing hold of one of the “empty” Toy-Cons creations and stepping in front of the main player can create on-screen interactions that allow everyone to be involved. Nintendo provided an example of this, where a second person could use the Toy-Con Snorkel to make a “bug-eyed fish” swim towards and surprise the primary player.

The Nintendo Labo VR Kit will come with 9 Toy-Con specific games/experiences and further 64 mini-games packed into the “VR Plaza” – which work with all the VR creations. Additionally, players will also be able to test their creativity and create their own experiences through the two programming tools (Toy-Con Garage and Toy-Con Garage VR) included in the bundle.

Ocean Camera (Toy-Con Camera): Dive into the deep blue virtual sea and complete objectives like taking photos of sea life. The ocean is full of surprises.

House Camera (Toy-Con Camera): Interact with the strange creature living in the house – which some people may recognize from the Nintendo Labo: Variety Kit! – and complete missions by taking photos in its mysterious home.

Marble Run (Toy-Con Elephant): Try to complete physics puzzles by using various objects to guide marbles through rings. You can even create puzzles of your own to challenge friends and family.

Doodle (Toy-Con Elephant): Create colorful 3D artwork by moving the trunk of the Toy-Con Elephant through the air, using various in-game tools and styles to bring your creations to life. Once finished, show off your masterpieces on the TV by docking your Nintendo Switch. An additional multiplayer game lets you take turns drawing and guessing each other’s drawings.

Bird (Toy-Con Bird): Soar through the sky on a bird’s back, collecting items and helping baby birds hatch along the way. Players flap the wings of the Toy-Con Bird to fly and simply tilt it to turn.

Bird Dash (Toy-Con Bird, Toy-Con Wind Pedal): Compete in timed challenges by racing through checkpoints as you fly through the sky. The Toy-Con Wind Pedal is used in conjunction with the Toy-Con Bird to deliver an extra boost of speed, while also sending a surprisingly strong puff of air toward the player that enhances the sense of flying.

Blaster (Toy-Con Blaster): Battle an alien invasion and giant bosses in an on-rails experience that requires sharp reflexes and a keen eye.

Kablasta (Toy-Con Blaster): Challenge a friend to competitive hippo feeding. Yes, hippo feeding! Fling different types of fruit toward the hippos to lure them to your side of the pool and score the most points.

Hop Dodge (Toy-Con Wind Pedal): As a frog, jump as high as you can on an ever-growing stack of balls while avoiding obstacles and heading soccer balls. The wind resistance from the Wind Pedal will make you feel as though you’re actually experiencing a breeze.

VR Plaza (all Toy-Con creations): Enjoy 64 bite-sized games and experiences in VR Plaza, including platformers and puzzlers. Many of these experiences can be enjoyed using only the Toy-Con VR Goggles and Nintendo Switch system.

If you can’t wait to dive into what Nintendo’s latest Labo kit has to offer then you can watch it in action directly below:

Such a bloody mess has never felt so fun.

Mixing up the music-rhythm genre.

The new IP will be the third title in Kamiya's Hero Trilogy.