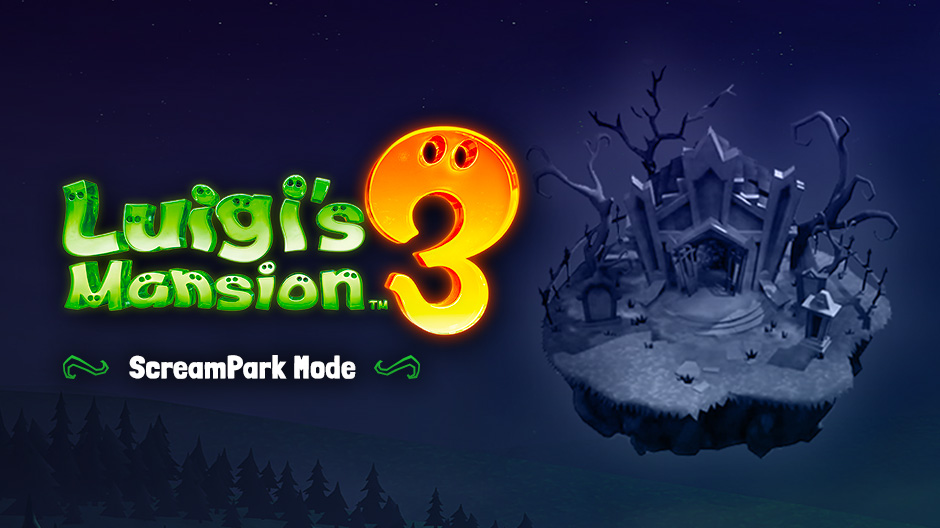 Nintendo has revealed some additional information about the competitive mini-games available in Luigi’s Mansion 3. Officially titled “ScreamPark”, the party-like mode pits two teams (supporting up to 8 players) against each other in a variety of different challenges.

ScreamPark mode is set to feature three different mini-games at launch, with the aptly named Coin Floating, Ghost Hunt and Cannon Barrage included from day one. Each mini-game will be timed, with players competing against each other to rack up the most points for their team. A stark difference to the Story and ScareScraper modes, which both see players working together towards a common goal.

At the start of each ScreamPark mini-game, players will be given the choice of supporting Team Luigi or Team Gooigi. Depending on the team chosen, players will be granted a playable Luigi or Googi and can then choose an individual character colour to help identify themselves when things get frantic.

First up is the ScreamPark “Coin Floating” mini-game.

Set in a not-so-relaxing swimming pool, Luigis and Googis alike are tasked with collecting as many coins as possible for their respective teams. Each player will be equipped with their very own floaty and can even propel themselves through the water (and hopefully to victory) using their trusty Poltergust G-00.

All is not as simple as it sounds though, as in addition to grabbing coins before the other team, players must also concentrate on avoiding a variety of different mines. Those unlucky enough to encounter a homing mine (or get pushed into floating one by another player) will lose everything they’ve collected and be temporarily blasted out of the pool.

Coins and mines aside, Super Star power-ups will also occasionally make their way into the pool. Players quick enough to grab one will benefit from a brief period of invincibility and, if they’re feeling particularly competitive, even can pop other players floaties.

The Ghost Hunt mini-game offers a more traditional Luigi’s Mansion experience for competitive players to sink their teeth into. Set in a spooky graveyard, teams will compete to capture various ghosts and score the most points for their team.

All captures are not equal though, as bagging a blue ghost will only bringing in a single point but golden ones could net a more impressive 3 points. Tapping X while standing near a gravestone will also allow players to check the memorial for additional goodies. If you come across a golden key, then you’ll even be able to unlock a third door and summon ghosts worth a whopping 12 points each.

Polterpup, the ghostly dog, can often be found darting through the graveyard too. If you manage to hit him with a flash from your Poltergust’s Strobulb, then Polterpup will offer up a useful bonus to aid you on your way. Glittering gravestones are also worth watching out for, as more than often they’ll reveal a golden ghost just waiting to be captured.

ScreamPark’s Cannon Barrage mini-game will definitely test your timing and teamwork. As team members will need to work together to collect, load and fire cannonballs at moving targets to rack up points.

At the start of the game cannonballs can easily be found rolling around the floor but once used up things quickly take a turn for the frantic. Whether you choose to tackle a ghost and claim their cannonball or use your suction cup to steal one from the opposing team is up to you. Whichever option you choose though, just make sure you have a team member ready at the cannon to fire it, otherwise you’ll find yourself losing out on precious time.

Collecting and loading cannonballs is only half the battle in Cannon Barrage. Fired cannonballs must actually hit one of the spinning targets to bag your team those game-winning points. Once a target has been hit, it’ll be used up for the rest of the game – making good timing crucial if you want avoid wasting that hard-earned ammo.

Fans of the included multiplayer modes will also be pleased to hear that Nintendo are planning to add additional content to both ScareScraper and ScreamPark in the future. The additional mini-games will come as part of a paid DLC pack, which at the time of writing, doesn’t have an official release date or price just yet.

Luigi’s Mansion 3 is set to launch worldwide on October 31st, exclusively for Nintendo Switch. Those looking to secure a physical copy or digital code can already pre-order the game from Amazon.

As with most Nintendo Switch releases, digital downloads of Luigi’s Mansion 3 will also be available to purchase directly from eShop.

Want to see the mini-games in action? Then check out the official Luigi’s Mansion 3 “ScreamPark Mode” gameplay video included below:

Who you gonna call? Luigi, of course!

A cozy game, for a lonely time.

Get your hands on these while supplies last!