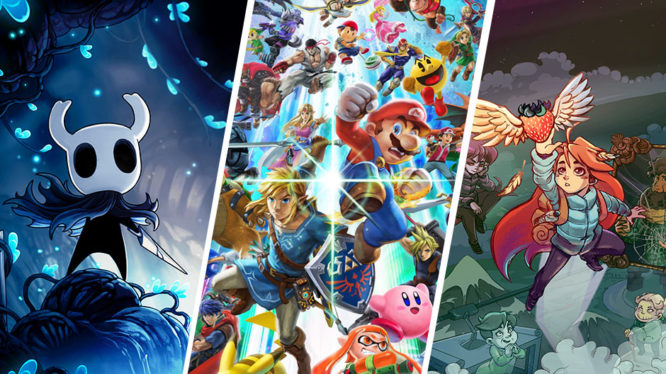 Just like that, another year is over and was host to some fantastic games on Nintendo’s hybrid console. As is common with this time of year, we wanted to take a moment to reflect on some of our favourite games from 2018.

We asked some of the LootPots staff to compile a list of the top 5 games they enjoyed playing the most on Nintendo Switch in 2018. These might not be brand new games, however, they are all new to Nintendo’s latest platform.

5. Super Smash Bros. Ultimate
They really did it. They made the best Smash Bros game and everyone is here. There’s really not much more to say than that.

4. Iconoclasts
Iconoclasts packs in an interesting cast of characters, a multitude of areas to explore, items to collect and bosses to fight. Topped off with some gorgeous pixel art, this is one to check out.

2. Celeste
I was surprised by how much I enjoyed Celeste. After hours of gameplay and thousands, I still think about how well designed, memorable and thought-provoking it was to play.

1. Hollow Knight
Hollow Knight is the undisputed king of Switch Metroidvanias. Everything about it is absorbing and melancholic, and you’d be a fool to skip it for the price.

An honourable mention as it was my most played game of 2018 goes to Fortnite.

4. Nintendo Switch Online’s NES Library
Pixel wants to act like this is a cop-out, but if you’re a retro gaming enthusiast like me, Nintendo Switch’s library of NES classics is a dream come true. The library isn’t quite as robust as I’d like right out of the gate, but I’m confident that Nintendo will continue to iterate on the service in a way that’s satisfying for gamers looking to scratch that nostalgic itch. Even so, the current offerings include some of Nintendo’s all-time greatest games and even the games that don’t hold up as well are a blast to mess around with, especially if you have a Player 2.

3. Pokémon Let’s Go, Pikachu! / Let’s Go, Eevee!
As a lifelong Pokémon fan, I was concerned by what the announcement of Let’s Go, Pikachu/Eevee meant for the future of the franchise. As much as I enjoyed Pokémon Go at launch (and understood the desire to capitalize on that new batch of players) I didn’t want to see its mechanics creep into the core series and was worried that this game would continue down the path of dumbing down the already very easy campaign found in any Pokémon game. I’m happy to report that the game not only assuaged my fears but also include

2. Celeste
I’ve said it before and I’ll say it again: Celeste is a master class in platforming. From Celeste’s story to its hauntingly beautiful soundtrack, the game is challenging, charming and moving. If you’re a fan of platformers and you’ve somehow not taken my rantings on the PotsCast to heart and given Celeste a try you are doing yourself a disservice. Do not sleep on this game.

1. Super Smash Bros. Ultimate
What can I say about Smash that hasn’t been said time and time again? Super Smash Bros. is an institution and Ultimate may just be the best one yet. Everyone is here and its even more glorious than I could have imagined. I can’t wait to play this game for years to come.

5. Pokémon: Let’s Go, Pikachu!
As someone who hasn’t touched a Pokémon title since the late 90’s, the latest installment rekindled my love for the franchise. While Let’s Go may have it flaws, it surely marks an important step forward for Game Freak. Plus Pikachu can ride on your shoulder and that’s all we really cared about right?

4. Okami HD
Okami has and always will be a fantastic game (and the HD port to Nintendo Switch is no exception). Beneath it’s beautiful and heavily stylised visuals lies excellent gameplay and a story rich with Japanese folklore. Painting the world with your Joy-Con enabled celestial brush might be a little buggy a times, but certainly makes the game feel at home on Switch.

3. Minit
Imagine you’re playing a top down Zelda game on a tamagotchi, now throw in a 60 second life-span, a rambling old man, a watering can, and bunch of clever little puzzles. Sound good? Then go play Minit.

2. Super Smash Bros. Ultimate
Everyone is here. Why aren’t you?

1. Hollow Knight
Hollow Knight is an indie metroidvania that raises the bar, lowers the price, and consistently over-delivers. It’s a game where exploration is as deadly as it is rewarding. Prepare to get lost in the stunning aesthetics, die to a plethora of bug-based bosses, hone your skills, fight your own shade, discover hidden pathways, and sit on a lot of benches. Wait a second… wasn’t I just here a few minutes ago?

5. Wandersong
I didn’t know what to expect when I reviewed Wandersong but it packed in some real surprises. Interesting gameplay mechanics, a wonderfully whimsical and charming story, along with a unique aesthetic all work in tandem to make Wandersong a great little game.

4. Pokémon Let’s Go, Pikachu! / Let’s Go, Eevee!
It’s been a number of years since I stepped foot in the Pokémon universe and Let’s Go was the perfect re-entry point. I have nostalgia for the Kanto region, and changes like making Pokémon visible on the overworld and replacement of Bill’s PC with one in your pocket made it much more accessible.

3. Katamari Damacy Reroll
Katamari is a franchise that’s been on the edge of my radar for years but I never got around to checking it out. With the original being remastered for the Switch and available for the first time in Europe I finally gave it a shot. It’s hilarious, bizarre and has that quintessential Japanese charm to it. Katamari Damacy Reroll quickly became one of my favourite games and I’ll be revisiting it for years to come.

2. Diablo III
This is no surprise to anyone that knows me (or listens to the PotsCast). I’ve been playing Diablo since Windows 95 was technology’s finest. Being able to take one of my all-time favourite games anywhere only made it better. Blizzard has also done an incredible job refining these controls for the console and we’ve certainly come a long way since the Diablo PS1 port in 1998!

1. Undertale
I didn’t know what to expect when I booted up Undertale but my gosh this is a masterpiece of a game. Hold all your judgements on the way the game looks or what you think it is until you play it. It’s funny, imaginative and it astounds me that it’s the work of a solo developer. Do yourself a favour in 2019 and pick up Undertale.

I also want to give an honourable mention to Celeste. I think it would have made it into my top 5 but I got to it very late in the year but I’m determined to get all those strawberries now!

5. Starlink Battle for Atlas
Yeah, the toys are an expensive novelty, but I love expensive novelties. I’m still amazed every time you seamlessly fly from space down to a planet’s surface. Plus, y’know, Starfox.

4. Super Mario Party
This one earns a place in my list simply for being one of the only games I’ve been able to persuade my mum and dad to play since Pokémon Stadium for N64. (And they loved it). Admittedly not as fun to play by yourself.

3. Owlboy
So charmingly quirky and fun, a perfect addition to the Switch’s lineup. The fact that Otus doesn’t really have any special or upgradable powers, and you have to rely on carrying allies to help you out, is a surprisingly refreshing twist.

2. Pokémon Let’s Go, Pikachu! / Let’s Go, Eevee!
Not necessarily the Pokémon game for Switch anyone was asking for, but a solid entry in the series none the less. Certainly got me hyped up for Pokémon 2019.

1. Captain Toad Treasure Tracker
Got 10 minutes to kill before you have to set off for work? Pick up Treasure Tracker and blitz a level or two. It’s such addictive fun that 15 levels later you’ll realise you’re an hour late for work, but it’ll have been totally worth it.

I know, I know, “where’s Smash”?! The painful truth is I just haven’t been able to afford it yet. It’s on the list; please don’t judge me!

Games like Luigi’s Mansion 3, Animal Crossing and the next generation Pokémon game are all expected later this year. There will undoubtedly be some surprises under wraps too, making 2019 look like the biggest year yet for Nintendo Switch.